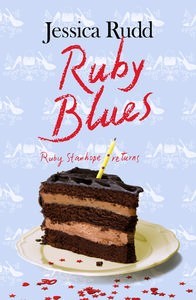 After reading and enjoying Jessica Rudd's debut novel, Campaign Ruby, last year I wondered at the end of my review if a sequel would be in the future - I'm not sure if I was the catalyst but a sequel has indeed just been released.
Ruby Blues starts 2 years after the end of the previous book. Ruby has been working for the Prime Minister, Max Masters, since his election win and she has also been in a relationship with his previous Chief of Staff, Luke. Unfortunately for Ruby, but fortunately for the reader, all is not well in her political or personal worlds. The glow of the election win is starting to wear off the government and Ruby's boss looks very much like losing his job at the next election if some major image and policy readjustment does not take place. Ruby's relationship with Luke is also travelling poorly in the polls with Ruby's busy schedule keeping them apart more often than not. Of course these tensions are just what is needed to drive the story along and give the reader something to care about and follow.
Rudd's writing is sharp, witty and engaging. As with the first book there are definitely quite a few plot twists that can seem a little on the coincidental side but somehow Rudd pulls them off without the book falling into the farcical zone.
Ruby herself is funny, energetic and at times just a tad annoying - but lovable all the same. Some new characters enter this book - with my favourite having to be political intern, Bettina who feels the need to express herself primarily in acronyms much to the disgust of Ruby.
A really enjoyable, fun read.
Posted by Karen at 11:43 PM

If you're interested in South Asian Fiction, you must check out the books on the Shortlist of the DSC Prize for South Asian Literature 2012

This serves a dual purpose because if a toiletry item bursts
or spills from its container, the jacket lining absorbs most of the stain or damage.

Season 1: From February to end of July: From approximately mid March through to the end of July the Nile perch are found in Shallow water.
We went all the way back to the gas station with my Aunt screaming at everybody for
not making sure Danny was not in the car.

You may even want to test the usability of the site, analyze how users are
navigating and how much time they spend on each page and identify areas that require change.
Hence ahead of developing a website, it really is really vital for your designers to know the aim with the firm.

You will also need to take into account any software or hardware costs, servers, domain names, advertising, anything
at all which has a fee attached.

A good follow up to the original book. Makes it more interesting that the book came out before the same political events happened in reality. Still a light hearted look at Australian politics and Australian life.