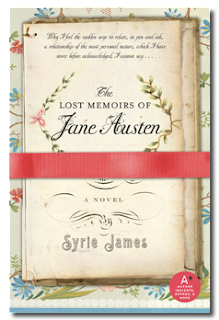 The Lost Memoirs of Jane Austen by Syrie James was just what I needed in my reading life at the moment!
I relish reading and re-reading my Jane Austen novels and I constantly mourn the fact that there are no others ever to be so although The Lost Memoirs is not up to the standards of an authentic Jane Austen novel - it still took me to all the right places.
The fictional premise of the book is, as the title suggests, that the long lost memoirs of Jane Austen have been discovered and published and that they primarily tell the story of a romance between Jane and a Mr Ashford - a character who is written as a composite of several of Jane Austen's literary heros. The fictional memoir also follows the story of Jane's life following the death of her father and her pursuit of publication and a writing career.
The description of the book from the author's website:

What if, hidden in an old attic chest, Jane Austen's memoirs were discovered after hundreds of years? What if those pages revealed the untold story of a life-changing love affair? That's the premise behind this spellbinding novel, which delves into the secrets of Jane Austen's life, giving us untold insights into her mind and heart. Jane Austen has given up writing when, on a fateful trip to Lyme, she meets the well-read and charming Mr. Ashford, a man who is her equal in intellect and temperament. Inspired by the people and places around her, and encouraged by his faith in her, Jane begins revising Sense and Sensibility, a book she began years earlier, hoping to be published at last. Deft and witty, written in a style that echoes Austen's own, The Lost Memoirs of Jane Austen offers a delightfully possible scenario for the inspiration behind this beloved author's romantic tales. It's a remarkable book, irresistible to anyone who loves Jane Austen—and to anyone who loves a great story. From the moment you open the pages of The Lost Memoirs of Jane Austen, you won't be able to put it down.

For once I agree with the hype - I was unable to put it down and only wish there was more! Apparently the author is now writing a similar novel based on the life of Charlotte Bronte.
Posted by Karen at 2:02 AM

I'm glad you liked this book. It seems that there are many recently published books out there based on Jane Austen's life or her characters. I've often wondered how good any of them are. Thanks for the review!

Thanks Laura! There does seem to be a lot of these sorts of books around doesn't there? I've read some not so good ones but I really enjoyed this one.

I've seen this book so many times, yet always hesitate to pick it up. I really must read it and think a similar book about Charlotte Bronte sounds just as interesting!