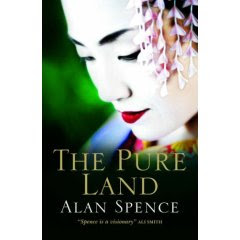 The Pure Land by Alan Spence was a book I had been longing to read after hearing the author speak so eloquently about it on The Book Show on ABC Radio National last year.
As The Book Show blurb about the book states:

This novel is a retelling of the story of Tom Glover, a Scottish trader who helped open up Japan to the western world in the mid-nineteenth century, and whose story was one of the sources for the sad tale of Puccini's opera, Madame Butterfly.

I was deeply involved in the beginning and endings of this book but I must admit - it flagged a little in the middle for me.
The story follows the young Tom as he ventures from his birthplace, Scotland, in 1858 to Nagasaki in Japan to work in the newly booming trading market and business. The story follows Tom as he becomes involved in Japanese tradition and politics (mostly for his own financial gain it would seem) and also the relationhships with Japanese women he forms during his life in Japan. There is also some time switching in the book where we see Tom's son as an old man reflecting on his life and the life of his father following the bombing of Nagasaki in World War 2.
As I said, I was drawn into this book at the beginning by Tom's sense of excitement and the "newness"of his experiences in Japan but I lost a little interest in the middle as it seemed to get bogged down in the details of his day to day business and political transactions. I did enjoy reading about some of his travels in Japan as I related to significant places I had visited on my own trip to Japan over 100 years after Tom's time there.
The book for me was another journey into a country I find beautiful and fascinating (even if it was told from the perspective of another Westerner).