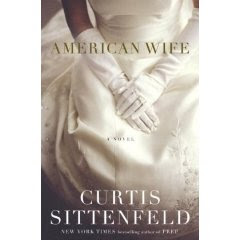 I am not sure exactly what drew me to American Wife - I had previously tried to read one of Curtis Sittenfeld's earlier books, Prep, but I just could not get into it at all. American Wife was the exact opposite - in fact, I stayed up very late last night just to get it finished - I had to know!!
American Wife is drawn from the life story of the current first lady, Laura Bush, a woman I must admit I knew virtually nothing about before starting this fictionalised account of her life (I have since toured Wikipedia to learn more!). I actually didn't realise that the book was based on Laura Bush when I started to read and I am glad about that because I probably wouldn't have even started the book if I had known that - which would have been a huge shame. My political leanings are very far from the American Republican party (Go Obama!) and I think I might have steered away from the book because of that. But, as the author portrays, the fictionalised first lady in the novel also shares some concerns about her husband's political leanings and decisions.
This book is simply wonderfully written - a real character story which is something I love.
I could absolutely love a book even if it was set in one room and contained one scene for the entire novel as long as the characters are expressive and reflective and true - does this make sense?
That's not to say that American Wife is not also full of story and plot - it is, but I think the characters - particularly that of Alice Lindgren/Blackwell are so expressive and moving that you want to stay on the ride just for them and their experiences.
If you want to read an amazing story read this book!
I now need to go and find something new to read that will keep me just as engaged. Any ideas greatly appreciated...
Posted by Karen at 2:03 AM

This has been on my list. Great review. I just reserved it from my library and I think I'm #66 on the list! I just finished The Guernsey Literary and Potato Peel Pie society and really liked it.

It's definitely worth the wait Holly!

This is the first review of this book I've seen and I'm glad you liked it. I'd heard it was coming out, but haven't talked to anyone yet who's actually read it. I really liked Prep, but this sounds really different!

Hi Jill - yes, from the little I actually did read of Prep I would say this book is very different. A great read!