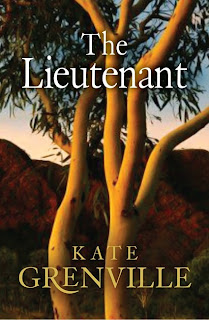 I became a huge Kate Grenville fan after reading The Secret River last year so I was very keen to read The Lieutenant when it was recently released - and I was not disappointed.
Both books focus on a similar time period and geographic area - the late 1700's and early 1800's in Sydney, Australia after the invasion of the land by the British. The topic area of both books is also very similar - the impact of the invasion of the land by white man on the Indigenous Australian's and also on the British invaders.
The Lieutenant in the book is Daniel Rooke, an extremely intelligent and sensitive man - not someone really cut out for the British armed forces in this, or any, time period. Rooke travels to the colony of New South Wales as a soldier but also a novice astronomer with a goal of recording the celestial events in the new land. Once in New South Wales Rooke isolates himself from the main camp and begins to build tentative relationships with some of the Indigenous people, in particular a girl by the name of Tagaran. This relationship and the dialouge between the two really is the core of the book.
I loved this seemingly simple but powerful book - even though this is a fictionalised account based on the life of a real person, William Dawes, I think it can still possibly inform us of some of the events and feelings of this traumatic and often violent part of this countries past - obviously still from the perspective of a white person which needs to be taken into account in our reading of this book.
Posted by Karen at 1:39 AM

I am looking forward to this one, when it finally comes into the library!

Hi Marg and Holly - yes, definitely a great read, and a surprisingly easy one considering the topic area which is quite in depth.