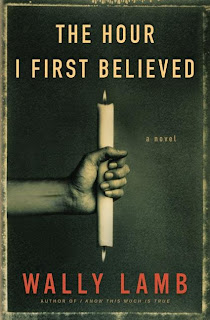 The Hour I First Believed by Wally Lamb is simply an amazing book - my best read of 2008 without a doubt. I read (i.e. devoured) the 740 page novel within a week and after finishing it I immediately wanted to go back to the beginning and start all over again!
Wally Lamb is am amazing story teller - the level of empathy he creates in and demonstrates through his characters is at such an incredible level that I am expecting to run into these characters in my local street - they feel that real and alive.
The Hour I First Believed covers some huge social and political events in American (and indeed, global) history and contemporary society, the American Civil War, the Korean War, the Columbine High School shootings, 9/11 and Hurricane Katrina to name a few.
The principle character in the novel is school teacher Caelum Quirk - an engaging and humanely flawed character dealing with not only his own personal and family history but also with the direct, immediate and long term impacts of the Columbine High School shootings on himself and his wife Maureen. Whilst Caelum was not present at the school on the day of the shootings Maureen (the school nurse) was and she was a direct witness to the violence inflicted on her students and colleagues. Whilst Caelum and Maureen are fictional characters Lamb does also write about real life people who were involved in this tragedy and names the students and teacher who were injured or killed.
The story follows the short and long term impact of this violent event on both Maureen and Caelum - how they deal with it as individuals and as a couple. As a social worker who has worked with and supported people following involvement in a violent or traumatic incident I was greatly impressed by the construction of trauma presented by Lamb and the holistic way in which it can impact on individuals, couples, families and communities, long after the trauma has occured.
The novel contains much more than just this main storyline - Caelum's family history takes on a much more central role in the second part of the book and it provides a view into how hidden trauma can impact on an individual's identity.
The novel is full of unique symbolism and metaphor - the role of butterflies and the praying mantis in particular - but to fully appreciate Lamb's techniques I will need to read this one again - the story had me too captivated the first time around!
If I am being completely honest and unbiased I would have to say that the second half of the novel probably didn't flow as well as the first half, but having said that, once I had finished the book I could see where the overlap and connections lay.
A brilliant read!
Posted by Karen at 8:02 PM

ay I've never even heard of Wally Lamb, but this book does sound like a good read. I will look out for it.

Hi Sarah - I would definitely recommend it! The other brilliant book by Wally Lamb that I love is "I Know This Much Is True" - they are both really big reads but they are so good you can just fly through them!

Oh goody - I just picked this one up this morning. It will be my first Wally Lamb. Just have to finish We Need to Talk About Kevein for bookclub first. And don't bother with the 19th Wife - I will blog more fully on it soon!

Hi Nutmeg - I really hope you enjoy Wally Lamb. Are you enjoying We Need To Talk About Kevin? I really enjoyed this one when I read it. Thanks for the tip about The 19th Wife - looking forward to hearing what you have to say about it. I have had it waiting in my pile for ages and I keep skipping over it for other books so somehow I might have known it wasn't going to be so great.

I didn't realise he had a new one out. I read "This Much is True" a few years back and really enjoyed it. It was one of those stories that has stayed with me, which is usually a sign of a good book.

Hi Kimbofo - I completely agree about I Know This Much Is True, it has stayed with me many years after reading it too. I know this new book will as well.

"The Hour I First Believed" is a page turner, especially at the beginning. The only criticism I have is that some of the writing became boring towards the end when the focus is on the ancestry of the main character.