Man in the Dark - Paul Auster 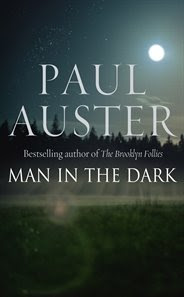 I have not read any of Paul Auster's novels before but if they are written anything like Man in the Dark I think I will have to pick some of them up.
I've finished this short novel (180 pages) in two sittings and although I am left wanting more - more of the characters not necessarily the story - I am by no means disappointed.
Man in the Dark is told from the perspective of 72 year old August Brill, an American man currently living with his daughter Miriam and granddaughter Katya after a serious car accident in which one of his legs was shattered. The household is submerged in grief - August's wife, Sonia died just over a year ago, Miriam is still coming to terms with her divorce from Kayta's father and Katya's boyfriend, Titus has been murdered - the details of which become clear at the end of the book.
The book is told over the course of one sleepless night - in order to stop his mind from turning to personal tragedies and painful memories August (a retired book critic) tells himself a fictionalised story of a man by the name of Owen Brick, a magician who finds himself caught up in an America in the midst of civil war in present day times. The premise of the story is that the events of 9/11 have not happened and instead of going to war with Iraq America turned on itself after the 2000 presidential election. An interesting premise indeed!
An emotive, intriguing and absorbing novel - highly recommended.
Posted by Karen at 10:20 PM

I've not yet read anything by Auster, but I am intrigued by your review of this. I will have to give it a try.

Hi Sarah - I would definitely recommend it for a quick but thoughtful read.

LOVED this one! The first book I read of his was The New York Trilogy (three interconnected novellas in one volume), and it was just stunning. If you liked this one you'll probably like it too.

Thanks Andi - I will definitely look out for The New York Trilogy.

This sounds really good. I've only read a couple by Auster (The New York Trilogy which I loved, and Moon Palace which was just ok) and want to read more. On to the wishlist it goes.

Hi Tanabata - it sounds like quite a few people are recommending The New York Trilogy so that has gone onto my neverending to read list!