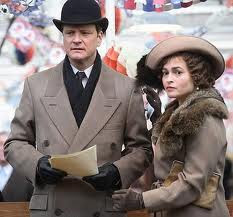 We went to our first movie of 2011 last night, The King's Speech, one I have been waiting to see ever since I first heard about it several months ago.
The movie focuses on the story of King George VI (played wonderfully by Colin Firth) from the time before he becomes King after the abdication of his brother Edward up until the start of World War 2. King George, or Bertie as he is known affectionately by his family, has a significant stutter which greatly impacts on his ability to perform his public duties and make important speeches. The impediment is of great embarrassment to him and his family and once he begins speech therapy with the unconventional Lionel Logue (played by Geoffrey Rush) we begin to see the origins of the problem and why it is has been so difficult for him to overcome.
It sounds like such a simple premise to take up the length of a whole movie but it is done brilliantly - there is tension galore and the suspense leading up to the King's first speech after the announcement of World War 2 is immense. The real focus of the movie is on the relationships formed by the King with those around him, including his wife Elizabeth played by Helena Bonham Carter (the real start performance for me) and that of his speech therapist, Lionel.
It is a beautifully made and performed movie - highly recommended!
Posted by Karen at 3:54 PM

I was fortunate enough to see this movie as a preview last March. I LOVED it and am very anxious to see the final cut version.

Hi Molly - Wow! That would have been wonderful. I'm sure you will love the final version.

I really want to see it.

I cannot wait to see this - what an AMAZING cast as well.

Absolutely cannot wait to see this--maybe this weekend. It's nice to see Helena Bonham Carter play something other than another eccentric, spooky character :)

I can't wait to see this film! It looks amazing! Thanks for confirming that it is :) Cheers! What a great film to kick off 2011.

My husband wants to see this at the weekend so it's good to hear that you enjoyed it!

I have been debating seeing this. I am not a big movie-goer but I love Colin Firth. Thanks for the recommendation!

This has been on our list for a while now, looking forward to seeing it really soon - we've heard so much good stuff.. not to mention the ausome cast. Of course, with your recommendation, it's a must!

I took my in-laws to this on New Years Eve while my partner and son went to see the new Harry Potter. All three of us adored the film, and we all have very very different tastes from each other. What a charming movie!

Hi Coffee - It is an amazing cast - they all do a brilliant job too.

Hi Jane - I totally agree about Helena! She is such a wonderful performer - I would love to see her take on more roles like this.

Hi Nadia - it was a great first film for 2011 - I started off last year with Bright Star which was also brilliant. Hopefully the rest of the movies I see this year will live up to it!

Hi Dot - I hope he takes you along to enjoy it with him!

Hi Lisa - Colin Firth is just fabulous in this one - go and see it!!

Hi T - I hope my recommendation is spot on and you enjoy this as much as we did!

Hi Lifetimereader - it is a movie that has so much for so many I think.

I loved this movie too (it's my pick for Best Picture so far). I hope Colin Firth gets his much deserved Oscar this year too!

Hi Carrie - I totally agree - he definitely deserves to be recognised in that way.