The Gift of Speed - Steven Carroll 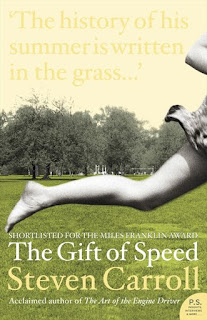 The Gift of Speed is the second book in the Australian suburbs trilogy (not the official title but it is how I am referring to the books!) by Steven Carroll.
After reading and loving the first book, The Art of the Engine Driver I was keen to keep moving with this series. The Gift of Speed picks up about 10 years after the first book, in October 1960, and although I liked to have the context of that first book in mind when reading this one it should be pointed out that the books could easily be read independently of one another.
The main focus of the story, as the title points out, is speed and how it can be achieved - especially in relation to the character of 16 year old Michael and his dream to bowl the perfect fast cricket ball delivery. Now, I don't think you need to be a cricket fan, or even necessarily have any cricket knowledge to enjoy this book - but it would help. Michael is obsessed with the game and his dream to be a fast bowler and his narrative in this book coincides with the West Indies cricket team tour of Australia over the summer of 1960/1961. Fortunately, although I wouldn't say I was a total cricket nut I do have some knowledge of the game thanks to growing up with a sports journalist for a father and a brother who reminds me a lot of Michael!
Although Michael's story isn't the whole of the story in this novel it is a great percentage of it - it is certainly the story that I was most interested in - how much do we want things when we are young (personally, I wanted to be a singer just like Olivia Newton John!) and how much does it hurt when we don't get them.
The rest of the story does keep showing us what is happening in Michael's suburb and particularly what is happening with his parents, Vic and Rita, and their relationship.
I did not enjoy The Gift of Speed as much as The Art of the Engine Driver but still a beautiful and memorable story which will lead me to reading this last book in the series.
Posted by Karen at 1:16 PM

Hmm, this one doesn't sound as captivating as the first book in the series did, but it's so hard to leave a series hanging when you know there are other books. I look forward to your thoughts on the final book in the trilogy! And I'm so glad you've found a new author to love - I'm keeping my eyes peeled for his stuff (though I'm avoiding the bookstore due to my complete lack of restraint!).

For me, the focus on cricket makes it more appealing! I will have to read this trilogy soon.

Hi Steph - I am in awe of your ability to avoid the bookstore - you will need to share your secret I think!

Hi adevotedreader - yes, I think the cricket focus will either make or break this book for some people!

i haven't read the first or second book and don't have even a working understanding of cricket. that said, i might check out the first book in an effort to read international authors! any others you'd care to suggest? :)

Hi booklineandsinker - if you are wanting to check out some Australian authors I would try The Spare Room by Helen Garner - one of my favourites. Also, Addition by Toni Jordan.

They do not require as much work as many other animals do and are really fun to watch.

E-papers do not minimize from covering stories that received little coverage in the reputed national papers.
Information regarding different websites that contain large chunk of databases of unclaimed properties and money
are also provided in different newspapers. That’s why, while
drafting ads for newspapers selling or buying a property, make your
USP as your headline. But I made it to a telephone and called Vito Genovese who was
at that time the most famous of New York's mafia bosses.

What's Taking place i am new to this, I stumbled upon this I have discovered It positively useful and it has aided me out loads. I'm hoping to contribute & assist other customers like its helped me.

Here is my web site: ravanshn.com

Fine way of explaining, and pleasant post to obtain information concerning my presentation focus, which i am
going to convey in academy.

Hello, all is going fine here and ofcourse every one is sharing data, that's genuinely excellent, keep up writing.

Stop by my web page http://www.10feb.com/index.php?do=/blog/6939/rewards-of-the-hamilton-seaside-932-manual-citrus-juicer/

An interesting discussion is definitely worth comment.
I do believe that you ought to write more on this topic, it might not be a taboo matter but usually people do not speak about such topics.
To the next! Best wishes!!

Hmm it appears like your website ate my first comment (it was
super long) so I guess I'll just sum it up what I wrote and say, I'm thoroughly enjoying your blog.
I as well am an aspiring blog blogger but I'm still new to the whole thing. Do you have any points for beginner blog writers? I'd really appreciate it.

I needed to thank you for this excellent read!!
I certainly enjoyed every little bit of it. I've got you book-marked to look at new stuff you post…

Hi! I've been following your blog for some time now and finally got the bravery to go ahead and give you a shout out from Houston Texas! Just wanted to tell you keep up the great job!

What web host are you the use of? Can I am getting your
associate hyperlink to your host? I want my site loaded
up as fast as yours lol

Take a look at my web page ... magic johnson

Good day! This post couldn't be written any better! Reading through this post reminds me of my good old room mate! He always kept chatting about this. I will forward this article to him. Pretty sure he will have a good read. Thank you for sharing!

Write more, thats all I have to say. Literally, it seems as though you
relied on the video to make your point. You clearly know what youre talking about,
why throw away your intelligence on just posting
videos to your site when you could be giving us something enlightening to read?

Helpful information. Lucky me I discovered your website accidentally, and I am surprised why this accident did not took place earlier!

After looking into a number of the blog posts on your blog, I honestly appreciate your
way of blogging. I saved it to my bookmark website list and will be checking back soon.

Please visit my website too and let me know what you think.

Hi there to all, it's truly a good for me to go to see this web page, it consists of important Information.

Also visit my page as seen on tv

Wow, that's what I was looking for, what a information! existing here at this weblog, thanks admin of this site.

Hey I know this is off topic but I was wondering if you knew of any widgets I could add to my blog that
automatically tweet my newest twitter updates. I've been looking for a plug-in like this for quite some time and was hoping maybe you would have some experience with something like this. Please let me know if you run into anything. I truly enjoy reading your blog and I look forward to your new updates.

Great site you have got here.. It's hard to find high quality writing like yours nowadays. I seriously appreciate individuals like you! Take care!!

I quite like looking through an article that will make men and
women think. Also, thank you for permitting me to
comment!

An impressive share! I have just forwarded this onto a co-worker who was
doing a little homework on this. And he in fact ordered
me breakfast due to the fact that I stumbled upon it for him.

.. lol. So let me reword this.... Thank YOU
for the meal!! But yeah, thanx for spending some
time to talk about this matter here on your website.

This piece of writing is genuinely a nice one it helps new net visitors, who are wishing for blogging.