I Capture The Castle - Dodie Smith 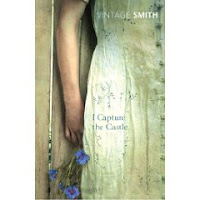 I purchased I Capture The Castle last week when I was in need of comfort reading - I had read it before and knew it would do the trick in soothing me back into the reading groove - and it did not disappoint.
That's not to say that this is an "easy" read in terms of topics covered or the subject matter - I think some of the issues mentioned in the book do cause you to sit back and think - but the way the story is told through the journal narration of a 17 year old discovering love for the first time is comforting in it's simplicity.
The family focused on in the novel has its quirks and idiosyncrasies, the narrator, Cassandra Mortmain, lives with her older sister Rose, younger brother, Thomas, father, step-mother and a family friend/worker, Stephen, in a crumbling, run-down castle in the English countryside. The castle is as much a character in the novel as any of the people - the family had moved in there after the unexpected literary success of the first novel of Mr Mortmain - a success that has not been followed up with a second novel of any description many years later. All of the families precious furniture and special items have long been sold to help pay for their basic living needs.
The arrival of a pair of American brothers, Simon and Neil, who have inherited the estate belonging to the castle causes some stirs within the family and it is decided that the elder daughter, Rose, will be the one to marry one of the boys, thereby rescuing the family from their poverty - very Jane Austen-Esq!
The unfolding of Cassandra as the novel progresses is beautiful, and at times, painful to watch. She is at the same time, young and wise, funny and serious, clever and daft - a perfect 17 year old! I absolutely loved Cassandra and the novel as a whole - I feel perfectly comforted now so thank you very much Dodie Smith! My only sad point is that there is no follow up to I Capture The Castle - I would have liked to have read about Cassandra as she continued to grow into adulthood - although maybe that would ruin the magic...
Posted by Karen at 2:47 PM

I read this for the first time last year and absolutely loved it! The narration, the characters, the story... it was all so lovely and thoughtful. I also respected that the story is in some ways very simple but also quite inspired - I thought I knew how it was heading, only to be thrown for quite a few loops. It felt very authentic and true to life. A great coming of age story to be savored at any age!

Sorry to be away so long!

This is one of my comfort reads too. I'm sure I named in some top ten list recently! I lent my out and now it has gone missing. The lovely cover of this one makes me think I may have to relent and buy a new copy :-)

p.s. I have a new blog home - www.rubyredbooks.blogspot.com (formerly nutmeg of anothernutter)

Hi Steph - it is almost a perfect books isn't it? (I'm too much of a realist to call anything perfect I think!).

Hi Samantha - so great to hear from you! I will be checking out your new blog right now!

I read this years ago - I can see I really need to re-read it as I barely remember it.

I've had this book on my stacks for farrrr too long. I know I'll love it when I get around to it, but up to this point I just haven't gotten around to it. That'll change soon, though, since it's coming up quickly in my reading in order challenge.

This is one of my all-time favourite books and the urge to re-read it soon has been creeping up on me of late.

I loved this book as well, to my surprise. It was a perfect escape.

I still have to read this one, bought it ages ago after hearing so many great things about it! I just wish I had the time to finally read it, but some books always comes up, heh.

I saw this book mentioned in your year-end wrap-up post. As I just finished reading this book last week for the first time, I have to say that I too would have loved to hear more from Cassandra and see her at a later point in her life. But maybe it's better that it wasn't messed with. Lovely book!

Hey There. I discovered your weblog the usage of msn.
This is a very well written article. I'll make sure to bookmark it and come back to learn extra of your helpful information. Thanks for the post. I will certainly return.