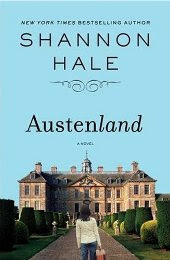 Austenland by Shannon Hale was my first read for the Everything Austen Challenge and I have to say that I was very disappointed with this book. I was so looking forward to reading it after hearing and reading such great things about it but I have to say - I don't think there is even one thing I can say that I liked or enjoyed in this book. I feel so awful saying that about a book that clearly so many people have enjoyed but I guess that's the way things go - not everyone is going to like the same things - and the world would be a very boring place if we did!
Austenland is the story of Jane Hayes - an American woman in her early 30's obsessed (as many of us are) with Pride and Prejudice - especially the BBC film version with Colin Firth playing the role of Mr Darcy. Jane has apparently been comparing every man she has ever dated with Darcy - with of course the only result being that every man has come up short. Jane has realised that this really isn't the most sensible way to live her life so in order to get over this compulsion to find her own Mr Darcy she takes a trip to Austenland - an English country estate set up to deliver its guests with an authentic taste of the Jane Austen period - complete with dashing suitors and possible offers of marriage.
I was just never able to get into this book or the storyline it presented. I wasn't ever really convinced of the character of Jane Hayes or what it was she was actually looking for - if anything. Her character, to me, seemed shallow and poorly developed - and I'm not sure how spending time in a Jane Austen theme park was actually going to "cure" her obsession with Darcy! I think this book highlighted my reading style - I like characters with substance and Jane Hayes did not deliver this for me. So, Austenland was not for me - maybe I need to go back to some authentic Austen for the time being...
Posted by Karen at 12:25 AM

I considered reading this for the challenge, but it seemed a little silly, so based on your review, I'm glad I decided not to!

I'm two episodes in to Lost In Austen, and I thought it sounded really cheesy, but I've been pleasantly surprised! If you haven't already watched it, I highly recommend it :) I watched one episode this afternoon and then spent an hour reading P&P (not good, when my to be read pile is so huge as it is!!)

You're not the only one who felt that way!! I've accepted that I won't read any Austen spinoffs; just Jane herself.

Oh just the title puts me off a bit, I have to say I am very very anti anyone messing with things Austen full stop, but the title of this sounds like a theme park. I wont be picking it up now for definate!

Hi Megan - I have seen Lost in Austen and like you I was a little hesitant at first but I loved it. I've watched it a couple of times since first seeing it. I feel like my TBR pile is getting out of control too. I'm starting to feel a little panicked by it which seems crazy when my reading is supposed to be my relaxing time!

Hi Eva - I'm still open to Austen spin offs - I don't mind reading books that have used Austen as inspiration - I can suspend my belief etc... as long as the characters are well written in their own right. But Jane herself will always be the best!

Hi Savidgereads - yes, I should have been more prepared but I still went into this read with such high hopes!

I am reluctant to read any spin-offs for the challenge (although I admire your enthusiasm) but may risk one...
Hopefully your next attempt at the challenge will be more successful and enjoyable.

I'm not doing the challenge, and with very few exceptions (Pamela Aidan) I haven't really liked any Austen wannabe sequels. However, I thought this one was simply fun.

It's always disappointing when you don't like a book after having high expectations for it. Sometimes all the hype doesn't help either. I've had that happen quite a few times.

Definitely a chick lit read, but it was fun and easy read for the Read a Thon. I enjoyed it for what it was.

Sorry you didn't enjoy it.

This, so far, has been the only Austen spinoff that I have read. Not sure I will read anymore, though.

Sorry this didn't work for you. It's the first (and only) Austen spin-off I've read. Like Mari, I just enjoyed it for what it was - quick, easy, and fun. But I wouldn't want it for a steady diet ;-)
Hope you enjoy whatever is next on your challenge list.

thanks for the honest review. i was considering this one, but maybe for the bottom of my list for now.

I read this one last year and really enjoyed it (I am a big fan of the writer)! Sorry it wasn't as good for you...oh well, on to the next book!

I will generally steer away from any book that winds up being Jane Austen fan-fiction (i.e., a book that acts as a sequel to any of the novels, or uses the same characters in any way), but this one has always intrigued me simply because it seemed like it was based on Austenmania, something I certainly experience. I'd probably want to go to a Jane Austen theme park, if there were such a thing, though I do agree that it probably won't help you cure yourself of a Darcy obsession!

Anyway, I've never actually gotten around to reading this one, but I probably still will if I think to add it to my queue at the library at some point. From your review it sounds like a pretty fluffy and disposable read... something I can read when I want a book where I can turn my brain off. Definitely not one to buy for keeps! ;)

What a bummer that it didn't fit your taste. I'm sorry that your Everything Austen challenge started out on a disappointing note - hopefully the next bit will be better! Good luck!

Hi Paperback Reader - thanks! I'm not normally one to stay away from spin offs - I just like them to have a little bit of authenticity to them!

Hi Holly - I think you are right - I probably went into this read with all the wrong expectations unfortunately.

Hi Mari - I'm sorry I didn't enjoy it too! Oh well - plenty of other books waiting!

Hi JoAnn - I love your comment about this type of book not making up a "steady diet"!! That is so true - this is definitely a "sometimes food"!

Hi vvb32 reads - I would still stay give it a go and see what you think - lots of others have really enjoyed it.

Hi Stephanie - I think by reading books you haven't enjoyed it is a great learning experience in many ways - it always helps me to become clearer on what it is I actually want from my reading which can't be a bad thing!

Hi Steph - If I am being honest I would have to say I would be a regular visitor at a Jane Austen theme park too! Definitely give this one a go - as you say, it would be a great read for just chilling out with.

Hi Miss Remmers - it was a little disappointing - but plenty more great Austen reads to be read!

I've never read an Austen spin-off for fear of being let down. I did get a little tempted and almost joined the Everything Austen challenge, but I'll settle with reading your posts. If I did succumb (plenty of time still, right?), I would probably just read the two books by her I haven't yet read (Northanger + Mansfield) and then re-watch movies. I admire you, though, for braving the spin-offs. :D

I borrowed this from the library, read about 10 pages and took it back. I figure if I want to read Austen-ish, I might as well just read the original. So I generally stay away from these sorts of book now.

I read this last year after a coworker said it was a quick, fluffy read--and it was inded that. To be honest it just wasn't my cup of tea either and at the end of the year I was looking over my list at what I had read and this was one of the few books I thought my time would have been better spent reading something else! It was a good reminder why I don't read Jane Austen spin-offs. I prefer to stick with the real thing in this case.

I've not read any Austen spin-offs but have been sort of tempted by this one. I may just have to pick it up and see what I think but am not expecting a lot so maybe that will help ;)

Hi Claire - you have to read Mansfield Park and Northanger Abbey! I love NA - MP not so much but it is still Austen!

Hi Tara - I was soooo tempted to not finish this one myself. I think the only things that kept me going were the fact I was reading it for a challenge - and I had actually bought a copy for myself!

Hi Danielle - I agree completely - the whole time I was reading this I couldn't help thinking about all the (probably) great books that were waiting for me!

Hi Iliana - I think not raising your expectations would be a good idea! Lots of people have enjoyed this one though.

Aw, I'm sorry you were disappointed! Based on your review, I'm sure I would have to agree with you about this one... I haven't picked it up yet, but I've heard decidedly mixed things about it. I also need very strong character development to get into a story, and any novel that can't deliver that isn't for me!

I'm sure you'll come across something much better for the rest of the challenge :)

Hi Meg - I am exactly the same as you when it comes to strong character development - if it is not there I can't get into a book at all.

I enjoyed this novel when I read it the first time when I started blogging about books, but after so many wonderful books, I might have a different take on it now.

It was really cheesy and outlandish, and I agree that I don't think Austenland was the best way for this character to get over her Darcy obsession.

I read this book about a year ago as well. It was fun and fluffy. But I thought it was also a bit one-dimensional on the character side and also very predictable with the "Darcy" character at the end of the book. Not my favorite read, but still fun for turning the brain off! And I still love Austen-inspired lit! can't get enough of it!

Hi Serena - Yeah - I just didn't get the idea of this book at all. I don't think it was all that well thought out which was what really frustrated me.

Hi hmsgofita - I thought the characters were really poorly written - I usually love anything Austen but this just didn't do it for me at all. Thanks for dropping by!