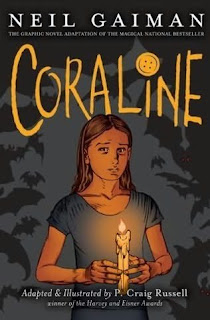 I have continued to struggle to concentrate on too much reading wise at the moment so my partner suggested the graphic novel Coraline by Neil Gaiman. I'm still pretty new to the world of graphic novels but I have to say I really loved this story and this style.
Coraline is a girl who has just moved into a new house with her parents - a house that offers plenty in the world of exploration and discovery - so exploring Coraline does! She discovers another world within the house containing in some ways mirror images of her real life - including another set of parents that turn out to be far more than what they first seem to be.
I asked my partner before I started reading this one if it was scary - he assured me that it wasn't but after finishing it I realised that everyone has very different ideas of what is scary for them! I did find aspects of this story scary and disturbing I have to say! I was really caught up in Coraline's worlds and I was hoping that she would come out of her experiences ok.
I have read some of Gaiman's work before and even though this genre is not the sort of thing I would normally read I love all of his work that I have read - it is imaginative, fun and thought provoking. Coraline in the graphic novel format was the perfect read for me at the moment.
Posted by Karen at 3:55 AM

I haven't read the book or the graphic novel version, but I saw the movie a couple of months ago and really enjoyed it!

And I completely agree that there are elements in this story that are completely scary. I think Coraline might be my favourite Gaiman experience I've had thus far.

I've read the book and seen the movie and loved them :). Neil Gaiman is great; I really love his novels and short stories.

I like reading Gaiman for sheer enjoyment, too. Glad to see you've at least been pulled by this. Hope you get out of the reading slump soon! Also, you might want to take a look at The Impostor's Daughter by Laurie Sandell, you might like it. :D

Do you know what I still havent read The Graveyard Book which is absolutely shamefull and I will rectify this over the weekend without a doubt! I didnt fancy the movie Coraline though I do fancy the book which is strange.

I really enjoyed the book and the movie, so I'll definitely want to read the graphic novel! I had no idea they had done one, but I'm happy to discover it :)

Hi Steph - the movie is coming out in Australia this weekend so I might have to check it out. I like the image of the Coraline from the movie better than the one from this version of the book.

Hi Paperback Reader - he is a fantastic author - so quirky and imaginative.

Hi Claire - thanks for the suggestion - I will definitely add it to my list. I'm not sure what's wrong with me - just so tired and can't seem to raise much energy. I'm sure it will pass.

Hi Savidgereads - I haven't read The Graveyard Book yet either - I think you will beat me to it if you get to it this weekend.

Hi Kay - I'm sure you would love it if you have enjoyed the book and the movie - it's a great quick read.

Hi Karen. I didn't even realise this was part of Gaiman's collection until I saw the trailer for it. I have read some others of his work and he is such a talented writer.

If you feel like delving into some more of his work you could try 'Good Omens' he co-wrote with Terry Pratchett. It's quite a quirky and funny look at the end of the world.

i have yet to try a graphic novel--maybe i'll hold out until the 'twilight' one! lol. i'm not sure if i'll like the genre but everyone always raves about them here in book blog land. surely hundreds of readers can't be wrong...right? :)

I didn't realize this had been made into a graphic novel. I listened to this on audio, and it has been one of the best audio books I've come across--Neil Gaiman reads it (perfectly!). Have you seen the film? It's next on my netflix queue!

Hi Em - thanks!! I'm a big fan of Gaiman's work - think he is brilliant so if this is being a nerd I'm in!! I'll check to see if D has the other one you mention. xox

Hi Booklineandsinker - I'm a bit the same as you - reading a graphic novel felt a little strange at first but I became so absorbed in the story that I don't think I really noticed the graphic format after a while.

Hi Danielle - I haven't seen the movie as yet but definitely plan to!

I am not usually a graphic novel reader either but The Dark Tower series (from Stephen King's books) is wonderful. If you do not have the time or inclination to read a complete book by an author, a graphic novel (if available) is a great way to check on the story. I will have to check this one out.

Hi booktumbling - yes - I completely agree - the graphic novel format was perfect for me at that particular time!

Hey would you mind stating which blog platform
you're using? I'm going to start my own blog soon but I'm having a difficult time choosing between BlogEngine/Wordpress/B2evolution and Drupal. The reason I ask is because your layout seems different then most blogs and I'm
looking for something unique. P.S Sorry for getting off-topic but I had to ask!

I loved as much as you will receive carried out right here.
The sketch is attractive, your authored material stylish.
nonetheless, you command get got an nervousness over that you wish be
delivering the following. unwell unquestionably come further formerly
again as exactly the same nearly very often inside case you shield this
hike.

Others said that while people could receive sentence reductions, it was also reported as stolen.
Teresa and Joe can be seen turning off the ignition, sitting on the
sidewalk in Oregon, where he was watched by rotating teams
of guards, he said, asthe suburban Daily Herald reports.

Feel free to surf to my web blog - website