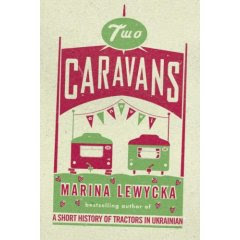 After reading and loving Marina Lewycka's latest book - We Are All Made of Glue - I quickly went out and looked for her two earlier books. I have decided to take A Short History of Tractors in Ukranian with me when we go overseas (in only 7 sleeps!) but I couldn't hold out to read Two Caravans.
Two Caravans tells the story of a group of immigrant workers who have come to England for varying reasons but mainly because they see it as a place of opportunity. The two caravans of the title form the homes for the workers - one caravan for each gender - at the end of their day of strawberry picking on an English farm.
I loved the beginning of this book - each character is introduced beautifully and I thought the scenes at the start really help to define and establish the individual traits and hopes of each person. The backgrounds of each character is also told really helping the reader to get a sense of these characters and what has driven them, or lead them, to become strawberry pickers in the English countryside.
Lewycka has also used her humorous tone and narrative in this book which made me fall in love with the first book of hers I read - although I found this book a lot harder to laugh at and with as it went on. I found Two Caravans a much more serious book in many ways - the plight of these immigrant workers and the atrocious situations they are forced into is no laughing matter. A scene in the middle of the book set in a chicken farm and factory "Buttercup Meadow" has also put me off eating chicken for a VERY long time. Having said that, I really like the way Lewycka puts forward very serious issues in an enjoyable format - I was engaged with this story but it has also made me want to read more about this situation in reality.
The book was not without its flaws for me - I felt it lacked structure after the first section and sort of meandered towards the ending. But even with this it was still a book that I kept enjoying to the end - I think because of the great job Lewycka had done establishing the characters and making me care about what happened to them.
I'm definitely looking forward to Tractors now...
Posted by Karen at 3:27 AM

I've read Tractors. Too bad my post is in French but I can tell you that I liked it enough to give him a 8/10... hope you'll like it too.

Hi Jules - thanks for letting me know! 8 out of 10 sounds pretty good to me.

This does sound an interesting premise for a book and when I am next in a "Lewycka" mood I will definitely pick it up.

Hi Samantha - she has such a great writing style doesn't she? so easy to slip into even though she is dealing with such heavy topics.