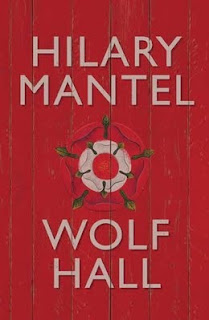 There has been a lot of discussion about Wolf Hall both before and after it was selected in the long list for this years Man Booker Prize. I was interested in reading the book as soon as I heard it was going to be released but then I saw the size of it and I became a little put off! The debate that has followed, the reviews (both positive and not so great) from fellow bloggers and my genuine interest in this period of history drew me back in though and I ended up starting the book a little over a week ago.
I have to say I am very, very impressed! This is my first Mantel read but if this is indicative of her writing style in general and her connection to her characters and the story she creates I will be reading others. That's not to say I didn't have some issues in my reading of Wolf Hall - but for the most part I loved the book and really didn't want it to end.
Wolf Hall focuses on the period in Tudor England when King Henry VIII is tiring of his first wife, Queen Katherine, and is setting his sights on the delectable Anne Boleyn. The protagonist of the novel is Thomas Cromwell, a common man who has risen to the ranks of advisor to the King and who plays an influential role in the shaping of England and the monarchy at this time.
Before reading this I felt that I had a fairly good (but still basic) level of knowledge about this period in history and the key players in it - I think this was needed for me to be able to connect with the story in Wolf Hall. Even though Mantel includes a list of characters at the start of the book (all 5 pages of them!) I think I would have struggled to follow along without knowing at least the basic gist. Having said that, I don't think this book is only for those with some knowledge of this time period - Mantel builds her characters and their motives really well - by the end of it you do feel that you know each of the characters as individuals in their own right. No mean feat for the author considering how many people she is following!
Cromwell was not really someone I had thought about in the context of this story before - even though I can see the important role he played I guess I always thought there were far more juicy and interesting people to focus on. I really enjoyed reading about Cromwell's thoughts and actions - albeit fictionalised - in Wolf Hall. I felt connected to the time period and what it might have been like for a man in his position - connected to the King but never really one of the upper classes. The family life of Cromwell is portrayed with sensitivity, humour and reality - I felt I had a sense of where he had come from and why he was the person he was.
At 650 pages this is definitely a big read (which is why I am including it in my Chunkster Challenge 2009!) and I did feel it started to drag a little in the middle section. But this was redeemed by the last section of the book - and I thought the ending was perfect! Left me wanting more and yet I still felt it was concluded beautifully.
All in all a really enjoyable and stimulating read - recommended if you have even the slightest interest in this period of English history.
Posted by Karen at 6:06 PM

Oh Karen, you've added another one to my wishlist. I've been interested in this due to the time period, but because of so many negative things heard from other bloggers was a little iffy. But you're one of the bloggers who has very similar tastes to mine, so now I'm surely reading this, but next year, after the tbr has dwindled down a bit. Thanks! :)

Hi Claire - I think this is one of those books you could read more than once and get something different from it in each reading. In some ways the narrative is very subtle - I had to concentrate to make sure I wasn't missing anything! I think you would really like it - looking forward to hearing what you think when you get around to reading it.

I added this to my list as soon as I heard about it, and I am hoping to get to it soon. I haven't read anything yet that makes it seem like it won't be worth the wait!

Hi Marg - I hope you enjoy it as much as I did!

I'm delighted that the book left you wanting to read more. Hilary is working on a sequel called "The Mirror and the Light" which continues to describe the rise and rise of Thomas Cromwell until his execution for treason in 1540.

Sounds like such a fab book! Its been on my TBR list for awhile and I can't wait to read it! What a great post, made me want to read the book now. Cheers!!

This one sounds great. Terrific review.

I too loved the book and reviewed it last night so is now up on my blog this morning.

I am thrilled to learn this is the first of two novels, the next will be all about Cromwell's fall from grace. A great review of a great book!

I'll be adding this one to my list, even though I tend to shy away from chunksters. I love that time period in history though and have been meaning to read something by Mantel so it goes on the list!

Hi Nadia - glad my review made you want to move this one up to the top of your list! Hope you enjoy it when you get to it.

Hi Savidgereads - so glad to hear you enjoyed this one too. I'm soooo looking forward to the sequel now!

You have reviewed it so glowingly I am sorely tempted. Like Iliana - I am shying away a bit from "chunksters" as I read quite a few in a row recently. I think if this book makes it into the Booker shortlist I will order it then ;-)

Hi Samantha - I had to talk myself into reading this one - but was so glad I did in the end.

I first read Hilary Mantel's novel Wolf Hall about a year ago. At the time I found it interesting and frequently confusing. After a couple of hundred pages I got into the rhythm of her idiosyncratic writing style. She leaves out convenient verbal guideposts like 'he said' 'she said' but simply writes the conversations and comments often without identifying the speaker. This muted my enjoyment of a fascinating tale.

Upon second reading I found myself enjoying myself hugely. I fell into Mantel's clipped style with ease and the story flowed without confusion and much enlightenment. Her characters are fully fleshed, living, breathing creatures that pop back to life after hundreds of years. My impressions of Cardinal Wolsey, King Henry VIII, Anne Boleyn and, most of all, Thomas More and Thomas Cromwell have been forever altered.

Mantel is not sympathetic to religious doctrine, especially when it is oppressive and innocent people are burned at the stake or disemboweled simply because they disagree with some smug, narrow-minded religious zealot like Thomas More or Stephen Gardiner.

Takes a bit getting used to. "Who says what" not entirely clear until one gets the hang of it as Mantel writes it. My enjoyment increased as I read it--rarely more than 20 or 30 minutes a day so it took me a while.