The Brightest Star in the Sky - Marian Keyes 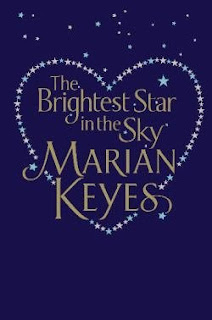 I am a huge Marian Keyes fan from way back but I was so disappointed by her last book, This Charming Man, that I didn't automatically rush out to buy her latest release, The Brightest Star in the Sky when it hit the shelves in Australia recently. However, after reading Dot's review I thought I would give Marian one more chance - and I am glad that I did.
I felt that with this book Keyes has returned to the style that made me enjoy her earlier books so much - a collection of interesting and flawed characters all interconnecting in some way to create a story. I must admit that there is a certain degree of "sameness" about a lot of her characters - a sense of having read about this character before - but I guess people in the real world are a bit like this too - we all share a lot of similar traits and characteristics in a way.
The Brightest Star in the Sky centres around the block of flats, and the people that live there, at 66 Star Street, Dublin. The reader enters the characters lives through an anonymous narrator who has the power to hover over each person seeing into their thoughts and memories. It is through this technique that we are able to see things that the characters might not know about themselves or things that they aren't letting other people know about. It is a clever technique that could have come across as way too cute or unrealistic but I think Keyes has made it work in this book - you are kept guessing until right at the end about who this elusive narrator may actually be - my first guess ended up being very wrong!
As with most of Keyes's books there is a mixture of lighthearted comedy and funny moments mixed in with far more serious issues. I felt that the serious issues in this book (one in particular) were probably brushed over a little too quickly - I can imagine that it would be a struggle to include issues like these in a book like this - you want to obviously get some sort of message across while at the same time making the book readable and enjoyable - a tough ask.
Overall my faith in Keyes has been restored - while not without it's flaws I was kept entertained right until the end of this one - and I will be buying her next book as soon as it comes out.

I read a lot of Marian Keyes when I was at university, but haven't read any for a while. I'm pleased that you find she is back on form, but I seem to have lost interest in her. Maybe I'll be tempted back one day...

I also went through a big phase of reading Marian Keyes books but it's been a while since I picked any of her books up. One of my favorite rereads is Lucy Sullivan is Getting Married, which has always been an entertaining comfort read for me. I'll have to check out her new book--she is fun and I'm curious now about the more serious issues she tackles in this book!

It's funny you know. I have read two reviews of this book today. One person was disappointed and you liked it. Guess I am just going to have to read it myself to see how it is!

Yay! I loved Mariaon Keyes up to her last book, so I am delighted to find that somebody else who felt the same way is more taken by this book.

I haven't read any Keyes, but I saw this at work and read the first chapter or so and thought it was pretty fun,e specially since this isn't the type of book I would normally pick up. I'm glad you found it a return to form!

Hi Jackie - I go through phases with some authors too - I like re-reading the early Keyes books - they take me back to my uni days!

Hi Danielle - entertaining comfort reads is a good way to describe Keyes's books - I still think her earlier ones are the best.

Hi Marg - I would be really interested to hear what you think about this one - I think it has divided some people for sure.

Hi Fleur - I really hope you enjoy this one more than the last!

Hi Steph - it would be great to hear what you think about this one if you do read it - especially since you have not read any of her other books for comparison.

Thanks for the link Karen, glad that you enjoyed it!

I'm so glad to hear you liked this, as I was also disappointed in her last book. I'll give this one a try when it is released here.

Glad to read you enjoyed this book. Its on my TBR list (well, it will be when it becomes available in America) and I can't wait to read it! Great review!!

Hi Dot - thanks for convincing me to read this one!

Hi Tara - I hope you are more impressed with this one when you get to it.

Hi Nadia - Thanks! I hope you enjoy it!