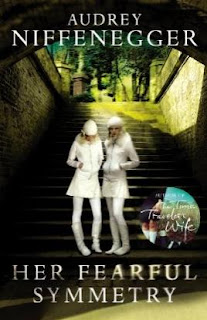 Her Fearful Symmetry by Audrey Niffenegger was possibly my most anticipated book release of 2009. I fell in love with The Time Traveler's Wife and the characters of Clare and Henry and I was so excited to see what the author of this book had come up with next.
I was in London on our trip in September when the book was released and I quickly picked up a copy (I must admit I was excited to be actually purchasing the book in London when so much of the story is set there). I finished the book quite soon after we had arrived home in early October but it has taken until now for me to write my review. A couple of reasons for this - firstly, I lent the book to my best friend as soon as I had finished it because I was eager to hear her views on it and I don't like to write a review unless my copy of the book is right beside me (is anyone else like this??) but secondly, I needed some time to digest my thoughts and feelings about this one before writing about it.
The book tells the story of two sets of twins, London based Elspeth and her sister Edie who lives in the USA with her 20 year old twin daughters, Julia and Valentina. As the book opens Elspeth is dying in a hospital bed with her long term partner, Robert close by:
Elspeth turned her face towards the door. She wanted to call out, Robert, but her throat was suddenly full. She felt as though her soul were attempting to climb out by way of her oesophagus. She tried to cough, to let it out, but she only gurgled. I'm drowning. Drowning in a bed...She felt intense pressure, and then she was floating; the pain was gone and she was looking down from the ceiling at her small wrecked body.
As a result of her death her twin nieces are sent a letter telling them that they have inherited her property and her apartment in London, right next to Highgate Cemetery, on the condition that they live in it for one year before they sell it. When the twins arrive in London they come to meet up with Elspeth's partner Robert and Martin, an agoraphobic, obsessive compulsive crossword puzzle designer who lives upstairs, both have an influence on and effect the lives of Julia and Valentina. As the young woman move into the apartment of their deceased aunt fractures start to appear in their normally closer than close relationship - one of the twins starts to imagine a life where she isn't tied to the other - and Elspeth herself plays a part in the lives of the twins.
I felt that the book started poetically and with great promise - the first chapter where Elspeth dies brought up so much emotion for me that I was almost in tears - but that is where the poetry virtually ended for me. I thought Robert was the most complex and in ways endearing character of the book but by the end I had lost all respect for him (as I think he would have for himself!). I did start out enjoying Elspeth as a character but I felt that the direction she was written into felt forced and unnatural - even for a ghost! Julia and Valentina were by far the most disappointing characters for me - they felt like cardboard cutouts for the entire story and while I felt I glimpsed moments where they had some character and depth this wasn't enough to sustain my interest - or my ability to care about what happened to them. The parts of the story where London and Highgate Cemetery were in focus were my absolute favourite scenes and I found myself reading faster just to get to these places in the book.
Two great reviews I have read about this book are from Jackie and Claire and some others that I have read have mentioned that you may need to suspend your beliefs in order to fully get on board with the content of this book but I didn't really have a problem with this at all. I am not sure if I believe in the actuality of ghosts but I do believe that an energy can remain after someone has died so for me this was not such a hard concept to grasp - I just don't feel that the connection between the characters was built up enough for me to believe in this particular "ghost" story.
Posted by Karen at 11:45 PM

I didn't particularly care for The Time Traveler's Wife (the characters did nothing for me, I'm afraid), but generally speaking it seems that people who were huge fans of that one have been less in love with this book, largely because of the characters! I wonder if my ambivalence to her first book means I would be more likely to enjoy her second, or if I would be bothered by the same things that bugged me in the first?

Regardless, it's always fun to buy books when away, especially when they're set in the city you're visiting! I found a copy of Northanger Abbey while visiting England a few years back and that was such good fun to read!

I totally agree about Robert...he just kept making bad decisions throughout the book. Actually, they all did. I was okay with the weird twist, but I wasn't okay with how everyone got to that point...and what they did afterwards. It just seems like the whole book was dependent on a series of decisions that no one in their right mind would ever had made.

This was a most helpful post. I thought the The Time Traveler's Wife felt partly forced, which, while I enjoyed, didn't really impress that much. So probably right on initial idea to pass on this one.

Oh no am sorry this wasnt wonderful for you. I have to say I had a few moments with it but on the whole I loved it. I also volunteer at Highgate and think Niffenegger got the cemetery spot on with all its atmosphere.

Hi Steph - I think The Time Traveler's Wife is one of those books that people either love or hate. I am clearly in the love camp! I'm not sure if you would enjoy this one or not - I am always hesitant to say "don't read a book" but I'm thinking this one would probably have a similar effect on you as TTTW.

Hi Softdrink - that is sooo true!! I couldn't put my finger on it before so thank you! All of the character's came across as un-human!

Hi Claire - I think you have probably made the right decision with this one!

Hi savidgereads - I so wish I had had the time to visit Highgate when we were in London - I know that would have helped me connect with the book more. Maybe next time!

I studied a lot of magical realism as an undergrad so I think I got really good at dealing with this kind of stilted strangeness, because I loved this book. But then, I was expecting it from Niffenegger. I found Henry and Clare pretty weird, and sometimes off-putting, at times, too.

I'm sorry it disappointed you, though!

Thanks for highlighting my review. I agree with yours. I loved the first chapter and was looking forward to another fantastic book, but then it all went downhill.

Let's just hope her next book on the furry girl is better (I'm a bit worried about the premise to be honest!)

I just bought both of Niffenegger's books for my mum's birthday present so I hope she's not disappointed with them.
It seems like they've had a mixed reception from other readers.

I've read neither yet, but will be receiving a hard cover copy of TTTW for Christmas. (I was going to buy it for myself but my wife insisted on getting it for me).

I have been intrigued by the concepts of these books, but I'll have to wait to see whether the author's execution meets the expectations inspired by those concepts.

Embarrassingly I have only just got a copy of The Time Traveller's Wife which I am hoping to read next but I have heard so many good things about this book too!

I didn't like The Time Traveler's Wife, so I'm not really sure if I want to read this one. Although I did hear Niffenegger on NPR and she made this new book sound so good that I might just pick it up. I liked your honest post about this book. Thanks!

I have not read this or the Time Travelers wife.

Hi Connie - I was sorry too! I really wanted to like it but I just couldn't!

Hi Jackie - I must admit that I'm a little worried about the premise of her next book too. As interesting and different as it sounds it just isn't grabbing me at the moment.

Hi Dot - I hope you enjoy TTTW when you get to it!

Hi Nadia - I would give it a go and see what you think - there have been so many different reactions to this one.

Hi Serena - are you interested in reading either of them??