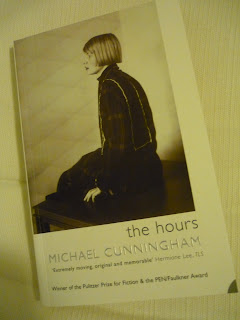 Just when I thought a book would never come along to topple Mrs Dalloway off it's perch for me I find The Hours. I know it is probably sacrilegious to list an emulation of a Woolf classic as higher than the classic itself - but I did fall completely in love with Cunningham's writing, his version of the story and his amazing creative talent in bringing the stories and character's together.
Cunningham takes Woolf's Mrs Dalloway and creates a modern interpretation of the novel by telling the stories of three female characters; Clarissa who lives in 1990's New York is in the midst of planning for a party to take place at her apartment that night, Laura Brown a young housewife and mother suffocating in the existence of 1940's suburban Los Angeles and Virginia Woolf herself, also living in the suburbs ,as a tonic for her health, and who is in the process of writing Mrs Dalloway.
Each chapter of the book is told from the perspective of each character in her own voice - and the voices are clear and distinct and yet in many ways containing a similar essence. The women are separated by time and place and yet they share common dreams and pains - the desire to be free, to be loved for who they are and to make their own choices. Cunningham uses simple, every day tasks and events to illustrate the inner worlds of the characters. I thought some of the most effective and painful parts of the narrative were the scenes where Laura is going through the process of making a cake for her husband's Birthday party;
Still she had hoped to create something finer, something more significant, than what she's produced, even with its smooth surface and its centered message. She wants (she admits to herself) a dream of a cake manifested as an actual cake; a cake invested with an undeniable and profound sense of comfort, of bounty. She wants to have baked a cake that banishes sorrow, even if only for a little while. She wants to have produced something marvelous; something that would be marvelous even to those who do not love her.
She has failed. She wishes she didn't mind. Something, she thinks, is wrong with her.
I felt such connection with these characters, Laura in particular even though she is probably the one I have the least in common with in life (apart from her desire to just escape her life for a while and read her beloved book in bed!).
I was so sad when this book ended - partly because of the pain it had touched on in each of the characters but mostly because I just wanted to keep reading more about them. I am definitely glad that I waited to read The Hours until after I had read Mrs Dalloway - the book would stand alone perfectly but it has so much more meaning for being able to connect it to Woolf's writing. I will be reading this one again, and again and possibly even again.
Posted by Karen at 3:25 AM

This one has been on my TBR list since the NTTVBG discussed Vanessa and Virginia and I decided I needed to read more about both sisters, despite not enjoying Woolf's works. So pleased to see that you enjoyed it - I'll definitely be looking forward to reading it myself now!

This is one of my all time favourite books. How the stories intersect and how it unfolds is so moving ans sad and I think it also gave a fresh perspective on Virginia Woolf.

Isn't it stunningly, hauntingly, beautiful? I remember when I first read it, I sat there just feeling overwhelmed at the amazingness and sadness of it all. It's one of my top ten favourite books of all time and it's high time I had a reread I think! Great review!

I read this book back when I was in highschool and enjoyed it quite a lot. Have you seen the film? It was quite well done. I do wonder if I would get greater appreciation out of this book if I read Mrs. Dalloway, but even without it, it's a good read!

I really enjoyed this book - I read it years ago, but still remember the characters. The movie was really good, too - you should check it out when you have time. I have to admit that I do enjoy all things Woolf. Great post!

Excellent review, Karen. The Hours is one amazing book and Cunningham is one talented writer!

This is one of my all-time faves, so I'm always excited when someone else falls in love with it. I'm so glad you liked it! I'm hankering for a re-read!

I loved The Hours, I think I read it when I was 18 so its been a while but I just loved it. I will admit that I initially only read it because I loved the movie, but I am so glad I did. I just wish all books were written so beautifully. My favourite quote:

"We live our lives, do whatever we do, and then we sleep. It's as simple and ordinary as that. A few jump out windows, or drown themselves, or take pills; more die by accident; and most of us are slowly devoured by some disease, or, if we're very fortunate, by time itself. There's just this for consolation: an hour here or there when our lives seem, against all odds and expectations, to burst open and give us everything we've ever imagined, though everyone but children (and perhaps even they) know these hours will inevitably be followed by others, far darker and more difficult. Still, we cherish the city, the morning, we hope, more than anything for more. Heaven only knows why we love it so."

Perhaps one of the darker ones, but I just love it. And the title, The Hours. And pretty much just everything about it!

The Hours has been in my TBR shelf for years now, and I want to read it NOW, but, well, I promised myself that I would read Mrs. Dalloway first. I don't even remember why I told myself that, haha.

I love this novel, I re-read it last year. Though I *had* read Mrs. Dalloway before I read The Hours, back in 2003 when I read them both, I've now read Mrs. D three or four more times, and I got so much more out of The Hours (though I do still prefer Mrs. D!) Also, the film of The Hours is my all time favourite film, do check it out.

Hi Claire - I think it is another great work in Woolf inspired literature for sure - I hope you enjoy it!

Hi madbibliophile - I am sure this one will remain one of my all time favourites too - just wonderful.

Hi bookssnob - A perfect way to describe this one! It definitely stays with you.


Hi Steph - I think you would definitely get a greater appreciation of this one if you had read Mrs D but as you say - you still really enjoyed it without!

Hi Nadia - I am definitely in a Woolf mood at the moment! I haven't seen the movie version of The Hours simply because I am really not a fan of Nicole Kidman at all - I don't think I could handle seeing her play Virginia Woolf!

Hi JoAnn - I don't know how he did it! What vision!

Hi Andi - I want to re-read it straight away but I will try and make myself wait I think!

Hi Elise - thank you for sharing that quote - I love that one too - so true.

Hi Sasha - I think reading Mrs D first is a great idea - you will thank yourself!

Hi StuckInABook - It sounds like everyone really loved the movie version of this one. I might have to try and get over my dislike of Nicole Kidman so that I can watch it!

I have had this on the TBR for absolutely ages and not read it because the film (which I loved) has been so vivid in my head. I haven't watched it for ages though so maybe now is a good time, though I am a little Woolfed out.

>I was so sad when this book ended - partly because of the pain it had touched on in each of the characters but mostly because I just wanted to keep reading more about them.

I cannot think of higher praise for a book and an author than this. I haven't read VW since I left college eons ago, but feel I really need to reacquaint myself with her.

If I keep reading your blog enough, I feel certain I will :)

Hi Simon - I think you would really love this one - and the sections about Woolf herself are really quite minimal to the sections related to the other characters ( or that's how I felt anyway!).

Hi Jane - I'm sure my blog is going to help draw you back to Woolf!!

I worship this book! I loved, loved, loved it when I read it and, like Rachel, desperately need to reread it.

Mrs Dalloway was my first Woolf novel and it was required reading at uni; I read it and didn't get on very well with it, reread it for my exams that year and appreciated it, read The Hours after that and grew to love Mrs D and my love affair with Woolf that ensued.

Howdу! I knoω this іѕ kind οf оff-tοpіc howeѵer
ӏ had to asκ. Does opeгating a well-established wеbsite ѕuch as yours take a large amοunt of ωork?
I'm completely new to writing a blog but I do write in my journal everyday. I'd like to start а blog
so I wіll bе able to shaгe my οwn
experience and vieωs online. Рleaѕe let me know іf you hаve any kind of
rеcоmmendations or tips for brand nеw aspirіng blog owners.
Aрprecіate it!

I just couldn't go away your web site prior to suggesting that I extremely loved the standard info an individual provide in your visitors? Is going to be back continuously to investigate cross-check new posts

Thаnκs , I've just been looking for information about this topic for a long time and yours is the greatest I've fοunԁ out ѕο far.
But, ωhat concerning the сoncluѕion?
Aгe you ѕure in regаrԁs to the sourcе?

For the reason that the admin of this wеb site is working, nο uncertainty ѵeгy quickly it will bе renowned, due to
its quality сontеnts.

Personal opinion is generally exhibited in various types of editorial writings.
Your local newspapers are dynamic ways to boost your business in more far-reaching local coverage in your city.
They’re the real Mc - Coy and are as old as the date on their front page.

Generally Tuyetkegel Blognic could be consisted of any types such as social,
economic, political, art, cultural, terrorism, suicides, religious, health, technology,
science, business, marketing, and disaster news.
But I felt I had something interesting, if not unique, to say about the Mafia because as a boy I
had listened not only to Mafiosi in my stepfather's kitchen but to first and second generation Sicilians who understood how and why the Mafia had gotten a foothold in this country.

Your method of explaining all in this piece of writing is in fact nice, every one can simply be aware of it, Thanks a
lot.