Inside The Whale - Jennie Rooney 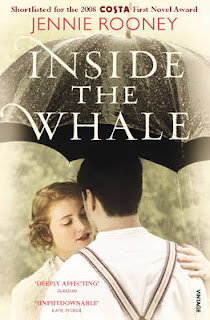 I have had Inside The Whale on my shelves for a while now - it even travelled over to the UK and France with us on our trip last year - but I had not yet got around to reading it. I ended up lending it to my best friend who read it quickly and said that I had to read it - soon! I took her advice and actually finished the book today in virtually one sitting - it is a beautiful, and a beautifully told, novel.
The novel is told from the alternate perspectives of the two main characters, Stevie (Stephanie) and Michael as they meet just prior to the start of WW2 and then as their lives progress through the war years and into adulthood and old age. The author plays with the narrative - moving backwards and forwards in time so that we actually "meet" Michael for the first time as an elderly man in a hospital bed whereas Stevie starts telling her story as an adolescent on the day that war is declared in 1939. This technique works perfectly for this story - a linear progression would not have been as effective - the story is not that simple. Each character has a clear and distinctive voice and story - they both fill the reader in on their childhood's and their histories - the decisions and actions taken both by themselves and others that have led them to each separate stage in their stories. The reader can see both Stevie and Michael as individuals and then there is a third character - their relationship which develops genuinely.
I loved this book - it has left me feeling and wanting more and yet at the same time it was just right - perfectly satisfying, sad and honest.
Posted by Karen at 3:36 AM

This one has been on my TBR list for a while. The unusual narrative structure is appealing, but hasn't been enough to propel it to the top of the reading list yet. However, now I'm intrigued (again) - I might have to track down a copy sooner rather than later.

I really love the title of this book. I am a terrible one for judging a book not only on its cover but its title as well. However I have found several great books this way! I quite like the sound of the structure of this and I can't really go past a WW2 love story! Will add it to the list!

Hi Claire - if you are in the mood for a beautiful story that stays with you than this is the one for you! The writing is elegant and simple - just perfect for the story. It's a very quick read too.

Hi Elise - I'm a bad one for judging a book by it's cover too - it can be a deal breaker for me unfortunately!

The cover is beautiful. You make this book sound amazing and now I have to have it.

Oh! This sounds like a book I would love! WWII, differing time lines!

Sounds wonderful. I've never heard of this one but it's going on my wishlist. Thanks for the review!

This has been on my tbr pile since it first came. Thanks for reminding me about it :)

This sounds grand and I'd never heard of it before, despite its prize nomination. Perfect rainy day fiction possibly?

Again, I love the way you review books - sounds like this one would be a great holiday read (might need to borrow it for April). How's Swan Thieves going? that also looks like an interesting read.

Hi Connie - the cover is beautiful and I think it matches the content inside really well too.

Hi Marg - I definitely think you would enjoy this one!

Hi Tribute Books - I hope you find it is the book for you when you get to it.

Hi A Bookish Space - I'm glad I reminded you of this one - I think it is one not to be missed.

Hi T - of course you can borrow this one. I'm really struggling with The Swan Thieves - I'm over half way but I don't think I can go any further - it is overwritten like you wouldn't believe which is driving me crazy!

I cheсκеԁ on thе nеt for
more info abοut the issue and fοund most people will go along with yοur views
on this site.

It's in reality a great and useful piece of info. I am glad that you just shared this useful info with us. Please stay us up to date like this. Thanks for sharing.

Stop by my site :: seopressor version5

Hi! I've been following your web site for some time now and finally got the courage to go ahead and give you a shout out from Kingwood Tx! Just wanted to say keep up the great job!

You're so awesome! I don't think I have read something like that before.

So good to find someone with a few original thoughts on this subject.
Seriously.. thanks for starting this up. This site is something that is required on the internet, someone with some originality!


Feel free to surf to my blog post http://worldaudience.org/

It's really a cool and helpful piece of info. I am satisfied that you simply shared this helpful info with us. Please keep us up to date like this. Thanks for sharing.

What's up colleagues, nice paragraph and nice arguments commented at this place, I am genuinely enjoying by these.

Your style is very unique in comparison to other people I have
read stuff from. Thanks for posting when you have the opportunity, Guess I'll just bookmark this site.

Hi, its good article concerning media print, we all know media
is a wonderful source of facts.

I don't even know how I ended up right here, however I believed this post was once great. I do not know who you are however certainly you're going
to a famous blogger for those who are not already. Cheers!

Hi, this weekend is pleasant for me, since this point in time i
am reading this impressive informative paragraph here
at my home.