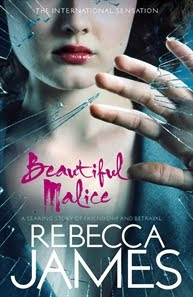 Before Beautiful Malice had even been released I had heard and read quite a lot about it and the woman who wrote it, Rebecca James. The media was hot on the story about how much James had been paid for this book and the "frenzy" it had started in the international publishing world with everyone seeming to want a piece of it. Of course this sort of publicity always makes me a little wary - but I have to admit it also sucks me in (I have always said I am a marketer's dream!).
Beautiful Malice has been promoted as a psychological thriller in the young adult reading area.
The main character, Katherine Patterson is a 17 year old in her final year of high school in Sydney - we find out early on in the book that she moved to Sydney a couple of years ago following a traumatic event, the death of her younger sister, that obviously impacted hugely on her whole family. Katherine is living with her aunt as her parents have re-located to nearby Newcastle but Katherine lives a fairly independent existence. This was an aspect of the structure of the book that never really rang true for me - this is a 17 year old whose sibling has died and yet her parents seem quite ok with her living away from them at a fairly important time of her life - the author did make some attempts at explaining this separation but they felt a little forced for me and even though it could be seen as a minor practical detail in the story it did affect how I viewed the characters and the authenticity of the story.
Katherine makes friends with another student, Alice, who begins to help her see the lighter side of life and connects her to a social world for the first time since the death of her sister. That is until cracks start to appear in Alice's character and Katherine comes to realise she can't really trust her.
The story presented is in some ways a coming of age story for Katherine who has to face the demons of the reality of her sister's death and the part she believes she played in it before she can begin to develop her own life as independent from this strong part of it.
I felt the author did a good job in building suspense and tension in the story and I read quickly - wanting to know more and more. There is a lot of devastation and tragedy included for one book - and for one character - at times it felt like Katherine (and the reader!) might not be able to take any more!
I did enjoy this book but for all it's dark content matter and issues handled I didn't find it completely satisfying if that makes sense?? I am wondering if a younger reader would have gained more from the experience?
Posted by Karen at 1:20 AM

This is the book that was going to be as big as Harry Potter or Twilight or something isn't it?

Interestingly, in the U.S. this book is actually being marketed to adults, rather than to YAs.

I actually have read the North American ARC for this book and I was REALLY underwhelmed. I thought it was pretty dreadful, both in terms of writing, pacing, and depth of story. I guess I could have forgiven some of these things if it were strictly for a YA audience, but if I'm the target, then I'd have to say this would be one of the worst books I've read this year! I can't believe publishers are going so crazy for this author...

Hi Marg - I think that's what they were saying - not sure if that will happen though...

Hi Steph - I can totally understand where you are coming from. I think a lot of what saved the book for me was my professional point of view as a grief counsellor - I did think there was a lot of important info for adolescents who might be going through their own losses. I'm not sure that was the point of the book though!

The cover is certainly beautiful; but I hadn't heard about the book though. It sounds interesting, but I'll have to look for more info on it. Thanks for the great review though!

Hi Kay - I would be interested to hear what you think of this one.

Heya are using Wordpress for your blog platform? I'm new to the blog world but I'm trying to get started and set up my
own. Do you require any html coding knowledge to
make your own blog? Any help would be really appreciated!

Have a look at my web page: pornharvest.com

This article provides clear idea in favor of the new people of blogging,
that truly how to do blogging.

Here is my site; Email Console

Excellent blog here! Also your website loads up fast!
What host are you using? Can I get your affiliate link
to your host? I wish my site loaded up as quickly as yours lol

Review my blog ... dont stop me

Good post. I learn something totally new and challenging on blogs I
stumbleupon everyday. It's always helpful to read through content from other authors and practice something from their websites.

Hi! This is my 1st comment here so I just wanted to give a quick shout out and
say I truly enjoy reading through your blog posts. Can you recommend any other blogs/websites/forums that deal
with the same topics? Thanks a lot!

Attractive section of content. I just stumbled upon your weblog and in accession capital to assert that
I get actually enjoyed account your blog posts. Any way I will be subscribing to your augment and
even I achievement you access consistently fast.