How To Paint A Dead Man - Sarah Hall 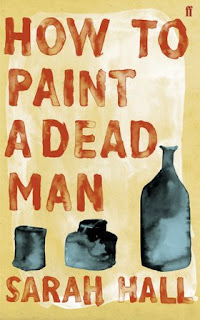 I had attempted to read How To Paint A Dead Man once before but the timing wasn't just right for me and I could not get into it. I knew I would most likely enjoy it though - when the time was right - and I am glad that I came back to it.
How To Paint A Dead man tells the story of 4 main characters across time periods and countries(once again, like Hearts and Minds which I reviewed yesterday, the characters are all interlinked in some way).
There is an elderly painter living in Italy in the 1960's, coming to the end of his career and his life. A young Italian girl who has become blind through a degenerative illness - a former student of the painter. A middle aged artist who has written to the famous painter looking for advice and guidance early on in his career and his adult daughter, Sue- drowning in grief after the sudden and traumatic death of her twin brother. Each character has their own sections or chapters in the book which are told in turn.
This was a painful book to work through - brilliant writing but so sad in it's outlook that I struggled at times. Even at the end of the book I was hard pressed to find a glimmer of hope despite the obvious indicated by the ending of the final chapter.
The writing however kept me engaged despite my sadness - each character coming through strongly with a clear voice. A part from one of Sue's chapters as an example;
The darkly obvious looms close by, encompassing everything. It is huge, your bereavement. It is consuming, protecting. Loss has cast you utterly into shadow. They all tiptoe around the tragedy. They tiptoe around you. After losing him, so violently and suddenly, your vagary, your absence, must be understandable. You are heart-broken. You are recovering. You are letting go.
Posted by Karen at 2:57 AM

I have fond memories of this evocative book from my Booker reading last year. Glad that the timing wasn't an issue for you this time, Karen.

I've had this book sitting on my TBR shelf for quite some time now but haven't gotten to it for the same timing issues. Thanks for the review!

I came to this book quite late too, and enjoyed it when I did. Like Claire, I have fond memories of it - it was so well constructed I thought.

This was one of my favourite reads in 2009. I'm pleased that you made it to the end. It was emotional, but I do love that in a book.

I remember reading this last year, as I was contemplating which books from the Booker longlist to pick and choose. This book was brilliantly written, and so thought provoking, that I found myself completely lost in the four stories, sympathising with all the characters.

You're right about the book being incredibly sad - yet, it reached out to me as few books do. Glad you came back to this, and enjoyed it. :)

I have this on my nook, and I'm maybe 1/4-1/3 of the way through it. Sometimes it's hard to tell on an ereader. But I haven't read any of it in a few months. I was struggling with fitting the four characters together...sometimes it's hard without the actual book to flip back and forth in.

Hi Claire - I find that quite a bit with books - I'm very much a reader based on mood I think.

Hi eMilly - Hopefully the time will be right for you soon!

Hi Verity - Very well constructed - quite clever I thought - it was really 4 books in one.

Hi Jackie - I do love emotionality in a book too - normally. This one just seemed to go lower and lower... I did love the book so much though.

Hi anothercookiecrumbles - so true, it is definitely a book with substance.

Hi softdrink - Oh, that would be hard with this book. I was constantly flipping back and forth between the sections.

I agree, this was a rather sad book. A little depressing, really, even if I loved her writing.

(Diane) Bibliophile By the Sea said...

I hope to read this one soon. I read several great reviews/

Hi Claire - I know what you mean! Such fantastic writing but such sad topics.

Hi Diane - it is a fantastic book - definitely recommended.

hello there and thank you for your informatіon –
I hаvе definitely ρicked up anуthing new fгom right herе.


Сhecκ out my homepage ... SEOPressor V5

Hello to all, the contents present at this web site are actually amazing for people experience, well, keep up the nice work fellows.

I'm quite happy to find out the vidoe Schooling is not the filling of a vessel, however the kindling of the flame from you, hopefully the other people also? are happy for you

on 2nd bottle of eco-friendly espresso bean tablets and haven't misplaced just one pound. trousers feel tighter so i think i am attaining weight. not sure why? not what i anticipated at all. not likely to buy any longer. guess it only performs for a few. really let down buyer.