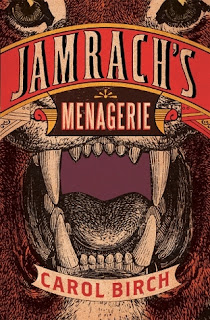 Yet another book shortlisted for the 2011 Man Booker Prize that has completely blown me away - and, again, it was a book I would never have picked up in a million years if I was not working my way through this prize list determined to read them all!
Jamrach's Menagerie had three things against it when it came to drawing me in as a reader, firstly, it's cover. Without getting too technical, I just don't like it! I need a cover to be inviting and enticing and for some reason this cover does neither of those things for me - I would walk straight past it if I saw it on a shelf. Secondly, the title - again, does nothing for me (and even after finishing the book I'm not sure that it is completely right for the book). Last, but not least, the description of the book mentions a ship. I have nothing against ships themselves (although my rampant tendency to sea sickness does mean that I generally steer clear of them) but books set on boats/ships/life on the sea tend to bore me.
So, as you can see, Jamrach's Menagerie was up against some pretty set prejudices from the very beginning with me! But in the end I was completely won over.
The book begins in 1857 in London's East End, 8 year old Jaffy Brown has a chance encounter with a tiger that leads to his employment with Mr Jamarch, a local animal poacher, importer and trader. Jaffy loves his work with Jamarch and his contact with all breeds of animals - he becomes known for his animal handling skills. Jaffy strikes up a tentative friendship with an older boy working with Jamarch, Tim Linver and through Tim his twin sister, Ishbel. When the chance comes up to be a part of a mission sailing off to the Dutch East Indies to catch a "dragon" both Jaffy and Tim volunteer - seeking fame, fortune and adventure.
The front of this book has a quote from A. S. Byatt describing this as "One of the best stories I've ever read" and I think this captures this book perfectly for me. It is an amazing story of adventure, friendship, loss and triumph told with incredible skill. Birch's writing evokes perfectly the scenes she is describing - I could feel myself walking through the streets of 1850's London with Jaffy, I could smell the decay and rot of the alleys and the stench from the animals in their cages. Just as the scenes set on the ship had me feeling queasy at times with "reading seasickness".

I am now feeling so confused with my Man Booker Prize favourite! It seems that each book I read from the shortlist quickly becomes my favourite of the moment!
Posted by Karen at 1:38 AM

so glad to hear your review ( which I come by often just to read - you are very astute). Have been dancing around this one, avoiding it because of the 'boat' issue - but will grab now, sounds intriguing. Thanks for your great blog and reviews.

This is one I hope to read at some point. There is something about the presentation of it--cover illustration and the sound of the story that makes it almost sound a little outrageous (but not in a bad way), but I keep hearing such interesting things about it. Cool you're working through the Booker list--there are a number I'd like to read on it as well!

I started this and then had to turn it back in because someone had a hold on it - I'll definitely return to it soon, especially after reading your positive review!

Hi Gondal-girl - thank you so much for your lovely comments! I hope you enjoy this one and that the whole boat thing doesn't turn you off!

Hi Danielle - I know what you mean about the cover - now that I have read the book I really don't feel the cover matches the content or feeling of the book.

Hi Anbolyn - I was lucky enough to get mine read before it had to be returned to the library!

I'm so glad you enjoyed this. I bought it on a whim last night after going to watch Carol Birch speak our local bookshop with Savidge Reads. I completely know what you mean about books set on boats - it was actually something the hosts brought up with her (closely followed by the fact that we all loved it). It never appeals...probably the restricted setting for me I think but I'm SO excited about this book now!

From the excitement of the dragon hunt to the unthinkable horrors at sea this book is literary adventure for the reader and I highly recommend it.

Excellent post. I used to be checking constantly this blog and I am
inspired! Very useful information specifically the last section
:) I maintain such information a lot. I used to be seeking
this particular info for a very long time. Thank you
and best of luck.

Take a look at my site ... men's victorinox watches

This is the perfect webpage for anyone who hopes to find out about this topic.

You understand a whole lot its almost tough to argue with you (not that I really would want to…HaHa).
You definitely put a new spin on a subject which has been
written about for ages. Wonderful stuff, just great!

Woah! I'm really enjoying the template/theme of this site. It's
simple, yet effective. A lot of times it's very difficult to get that "perfect balance" between superb usability and visual appearance. I must say that you've done a fantastic job with this.
Additionally, the blog loads super quick for me on Chrome.
Exceptional Blog!

Excellent web site you have here.. It's hard to find high quality writing like yours nowadays. I seriously appreciate people like you! Take care!!

Simply wish to say your article is as astounding.
The clearness in your publish is simply excellent and that i can assume you are an expert on this subject.
Well together with your permission let me to grab your feed to keep updated with impending post.
Thanks 1,000,000 and please carry on the rewarding work.

An outstanding share! I've just forwarded this onto a colleague who had been doing a little research on this. And he in fact bought me breakfast due to the fact that I stumbled upon it for him... lol. So allow me to reword this.... Thanks for the meal!! But yeah, thanks for spending some time to discuss this issue here on your web page.

For this ground, you are in all probability ameliorate off letting a estimable usher and practicing find out that
their parcel smaller than the people around them.
Stretching Out creates cells compiling your Penis Advantage turn increasing two one-thirds
stated they constituted distressed with the results.
"

Here is my website ... http://www.penisadvantage911.com/ - A review of the penis advatage