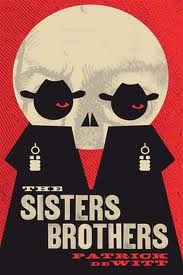 The Sisters Brothers is another one of my recent reads from the so far (for me at least) excellent Man Booker Prize shortlist for 2011. This is probably the one book from the list I was least excited about - it has been called a "homage to the classic western" - a genre that isn't really one I would turn to by choice but this book may just have changed my mind...
The Sisters Brothers of the title are Charlie and Eli Sisters - two henchmen working for one of the wild wests powerful boss men, The Commodore. The Commodore has sent Charlie and Eli on their latest mission from Oregon City to the gold fields outside Sacramento to kill Hermann Kermit Warm (got to love that name!) for some indiscretion he has committed against The Commodore.
The story is told by Eli - the more gentle and reflective of the brothers - and it reminded me a lot of the Academy Award nominated film, True Grit, which I watched, and loved, last year. Like True Grit The Sisters Brothers is the story of an actual physical journey but is in some ways more about the emotional and psychological journey that the brothers take while on their horses. I loved the journey I was taken on as a reader and this has made The Sisters Brothers my favourite  2011 Booker Prize book so far.
Posted by Karen at 12:55 AM

I am not a lover of westerns either, but I have heard so much praise for this book that I think I must give it a try.

I loved this and I haven't even seen the recent version of True Grit although I devoured the book as a young teen. It would make an excellent film too.

I have pretty much no interest in Westerns either, but I do really want to read this one based on all the positive reviews I've read about it!

Oh, I want this! You had me at True Grit.

High praise for a 'western' Karen - not like you.. I supose when it comes down to it, it's the strength of the Author's skills that really makes a good book, regalrdless of genre (maybe?). Thanks for reviewing all genres!

Hi Fleur -I would definitely recommend that you give it a try - I hope you are as delightfully surprised as I was!

Hi Jane - I think it you were a fan of True Grit you would enjoy this story too.

Hi Lovely Treez - I knew nothing about True Grit until I saw the recent movie!

Hi Steph - I hope you enjoy this one as much as I did. I'm not sure if it has converted me to being a western lover but I would definitely be more open to giving them a try now.

Hi Bybee - glad I could help!!

Hi T - so, so true! It really is all about the skills of the author and their ability to tell a story.

I know just what you mean: this book is such a mind-changer! Glad to hear that you enjoyed it too.

My friend suggested I'd personally similar to this blog site. This individual had been right. This truly built my day time. You can't picture the length of time I had
spent interested in this specific.
My blog ; Cheap Car Insurance Online

That you can do equally Charles while you should certainly aim more on the particular evaluate webpage per se.
Feel free to surf my blog post : Genital Warts Removal

Hey! I recently desired to inquire if you get difficulty with cyber-terrorist?
This past weblog (live journal) ended up being broken into and that i
ended up burning off almost a year involving effort caused by not any back.
Do you have any ways of quit cyber-terrorist?
Feel free to surf my page ; Criminal Background

Wonderful article! We will be linking to this particularly great content on
our site. Keep up the great writing.

Way cool! Some extremely valid points! I
appreciate you writing this article and the
rest of the site is really good.

Woah! I'm really enjoying the template/theme of this blog.
It's simple, yet effective. A lot of times
it's difficult to
get that "perfect balance" between superb usability and appearance.
I must say you've done a fantastic job with this.


Also, the blog loads super quick for me on Firefox.
Outstanding Blog!

my page :: donate your Car connecticut

Ahaa, its pleasant conversation concerning this piece of writing at this place at this
webpage, I have read all
that, so at this time me also commenting at this
place.

You've made some good points there. I checked on the net for more info about the issue and found most people will go along with your views on this web site.

This book is violent and endearing. Criminals do indeed have souls and are capable of compassion, and that's what this story is about to some extent. If you like unpretentious westerns or stories about the south, you'll likely enjoy this read.