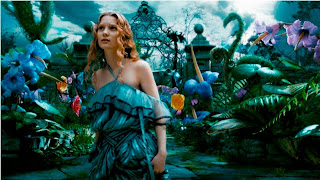 My partner and I spent an afternoon in a jam packed cinema this weekend watching the new Alice In Wonderland movie. I have to firstly confess that I don't think I have actually read the books all the way through - I am certainly familiar with the stories but as for having sat down and read the book - that is something I am going to have to go back and do now!
The movie was certainly an adventure but I can't say that it met all of my expectations - not that this is necessarily a bad thing. I was thinking the movie's PG rating would mean it was a bit of a let down content wise but I actually think a lot of the movie would have been lost on younger children and thinking of the primary school aged children in my life my main thoughts were that they would have been bored through a lot of it. We saw the movie in all of it's 3D glory (this is only the second feature film I have seen in this way - the first being Avatar) and I do think this format adds some magic to the experience (if also an awful headache from wearing those ghastly glasses!).
The young Australian actress playing Alice, Mia Wasikowska, was divine - I thought she brought the right combination of innocence, confusion and fiestyness to the role and I also thought she helped to create a real feminist message to the role, and the movie in a way. Johnny Depp was, as expected, clever and wacky as The Hatter and he has made me want to throw a tea party in the not too distant future! The costuming (always one of the highlights to a movie for me) was gorgeous and innovative. All in all a satisfying movie experience - now to move on to the book.
Posted by Karen at 12:17 AM

I saw the movie in 3D as well, and thought it was fun. Some of it was disappointing - the jabberwocky scene comes to mind, but I was thoroughly entertained.

Depp was brilliant, as was the Queen Of Hearts. Love her.

I read Alice in Wonderland for the first time last year and really loved it. But my understanding is that this movie is kind of like a sequel, rather than a reimagining of the book itself. Still, the book is a lot of fun!

I think we'll wait to see this one on DVD, but I do expect it will entertain!

I can't wait to see this movie, though I'll have to wait at least 2 weeks, due to travel conflicts.

Two of my teenage kids saw it over the weekend and loved it, though my son said never again to the 3d--gave him a headache. I get motion sickness and I've wondered if the 3d would make me feel woozy.

I know the books well--my dad used to read them to me regularly as they were among the few kids books that he liked--and I'm a bit concerned about the deviations from the canon, but it sounds like a fun movie regardless.

Thanks for your thoughts on this. I haven't read the books either but know the story so was still a bit on the fence about watching it. I'm going to give it a go soon. I like the photo you included - all that beautiful blue - I can see where OPI got their inspiration for their 'Absolutely Alice' nail paint - mesmerising :-) http://www.alllacqueredup.com/2009/12/opi-alice-wonderland-collection-swatches-review.html

Hi anothercookiecrumbles - Yes, I thought the Queen of Hearts was definitely the best queen of the show - I'm not sure what they were trying to do with the White Queen character but it wasn't working for me.

Hi Steph - Yes, the movie is based more on the second book - Alice's Adventures Through The Looking Glass - I thought they actually wrote this into the movie really well.

Hi Jane - I get quite severe motion sickness too but I have seemed to be ok with the 3D movies I have seen, I think the trick is to keep your glasses on and don't try to switch between normal and 3D vision.

Hi Rochester Reader - I think the movie was worth seeing just for the gorgeous costumes alone!