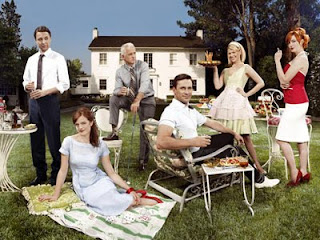 I have written about my obsession with the show Mad Men before. The third series of the show has recently started on Australian pay tv but I am a little behind the times as I have just finished watching series two on DVD - I binged on the whole series over three nights while my partner was in Sydney for work last week so that I could start to catch up.
The show oozes charm and style, the costumes and sets are gorgeous and refined and the characters and the script are sharp. New York in the 1960's is definitely a time I would like to visit (if I'm truly honest just for the clothes and the cocktails!) but I am realistic enough to know that my role as a woman in that society would most likely have been restricted to the role of housewife or secretary - neither of them roles I would enjoy or excel at I fear.
My favourite character and actress in the series is Christina Hendricks who plays feisty Joan - a woman with definite power in series one but I have found it interesting the direction in which her character has been taken in this second series - I feel some of the power has been lost - to a man none the less. It will be interesting to see where this heads in series three.
Posted by Karen at 12:59 AM

I adore Mad Men! I loved Series Two but Series Three is wonderful - weird, but wonderful with a sublime finale.

I worship Joan and her storyline is the one I think I'm most invested in emotionally. It's very interesting to see how the different female characters evolve as the times change (and, let's be honest, watching the fashions change is almost equally fascinating).

I've never heard of this series, I wonder if it will make its way to free-to-air tv? It does sound quite charming!

Hi Claire - I'm so excited about starting series 3 now! It seems that the show has been getting a little bit stranger every season. Can't wait to see what comes next! I really don't want Joan to marry the doctor!

Hi Elise - I saw the first season on SBS a while ago now so they might play the second series too??

I love Mad Men but have only watched it on and off. I've recently watched through the S1 set and now have S2 set for some intense Easter watching.

I'm curious to find out what blog system you have been using? I'm having some small
security problems with my latest blog and I would like to find
something more risk-free. Do you have any recommendations?

Right here is the right website for anyone who hopes to find out about this
topic. You know a whole lot its almost tough to argue with you (not that I
personally would want to…HaHa). You definitely put
a new spin on a subject that has been discussed for
many years. Excellent stuff, just excellent!


My weblog - “eat your fruits and vegetables”. now

I love what you guys tend to be up too. This type of clever work and coverage!
Keep up the fantastic works guys I've incorporated you guys to my personal blogroll.

Here is my web page - http://wiki.cryptic-universe.de/

It's an amazing article designed for all the web viewers; they will obtain advantage from it I am sure.

Feel free to surf to my web-site - http://Wiki.sylph.ws/

Valuable information. Fortunate me I found your site accidentally, and I
am surprised why this accident didn't came about earlier! I bookmarked it.

Check out my web site :: Wiki.unict.It