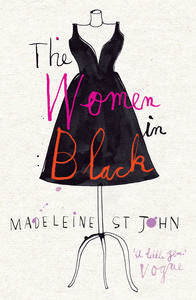 I am ashamed to say that I had never heard of the Australian author Madeleine St John before being attracted to the recently re-released cover of The Women in Black. This was her first novel published when the author was 52 years old in 1993 and has been re-released with a forward by Australian film maker Bruce Beresford and an obituary by the author's publisher (St John died in 2006). St John also had a book short listed for the Booker Prize in 1997 - The Essence of The Thing.
The Women in Black is the author's only book set in the country of her birth - Australia. It follows the lives of a group of female sales assistants working in the high class Sydney department store, Goodes, in the 1960's. Goodes is a fictional store but it is believed that St John based her setting on the real David Jones department store of the time.
Mrs Williams (Patty) and Miss Baines (Fay) work with others in the Ladies Cocktail Frocks section of the store - an area that is becoming increasingly busy as Christmas draws near as the book opens. The group is joined by temporary staff member, Lesley (who prefers to be called Lisa) a young girl who has just finished her leaving certificate at high school and is waiting anxiously to see if her results will be high enough for her to earn a scholarship at university.
The gorgeous, exotic and voluptuous Magda works in the Model Gowns section of the store (one of a kind gowns sold to women who do not want to attend a function looking like anyone else) and she enters the lives of these women in Ladies Cocktail Frocks in subtle - but no less dramatic ways.
I can't believe I have not discovered this book before - I devoured it in basically one sitting yesterday and I just wanted it to keep going - although the ending was divine and I wouldn't have wanted it any other way. I think it helped that I have spent quite a bit of time at the David Jones department store in Elizabeth St in Sydney so even though this book is set in a time before I was born I still feel like I had a familiar context firmly in mind as I was reading the book. Lesley/Lisa is a gorgeous character and over the short course of the book you do see her develop which is lovely to watch. Just a gorgeous, sweet, beautiful read!
Posted by Karen at 1:16 PM

It sounds great, especially the David Jones connection - I've spent many hours in that store, throughout childhood and into my adult years :)

I'd seen the book around before but didn't realise it was by an Australian author - I also assumed it would be too chick-lit-y for me - but it sounds like I've been a bit of a snob!! :)

Was going to asking if I should add it to my TBR list, but I have a feeling your answer would be a resounding YES! :D

Hi Megan - I would definitely recommend adding this one to your list! I guess it does have an element of the chick lit about it but the writing is wonderful and I felt the characters had a lot more depth to them than your typical chick lit book. I would give it a go!

I've read her book 'The Essence of the Thing' which was nominated for the Booker prize. I enjoyed reading it - it was like being able to evesdrop on someone elses gossip! The only thing I didn't really like about it was that the plot was almost non exisitant, so the ending was a bit of a disappointment. Does this sound like a description of 'The Woman in Black' or has this one been written differently?

Hi farmlanebooks - I wouldn't say that the plot is non existant in The Women in Black but I guess you would say it is quite a simple plot - the characters are definitely the focus of the novel in this one.

Never heard of this but it sounds like a fun book! Adding it to the radar.

I've only recently heard of this, but it sounds fun so I'm looking forward to reading it. I love DJS, which should help.

Its plot vaguely reminds me of Come in spinner, which is another very enjoyable Australian novel full of interesting characters. In its case, they all work in a beauty parlour in Sydney during WWII, I'd recommend it if you haven't read it .

Hi Iliana - it is definitely a lovely read!

Hi adevotedreader - Thanks for the recommendation - I have heard of that one before but only as a movie/tv series I think??

It was made for TV by the ABC with a very young Rebecca Gibney in, I saw it after reading the book so can't say if it really is good or if my affection for the book clouded my judgement!

I just devoured this book in one sitting too! Like you, I can't believe that I have never read it. What a pleasure to stumble across something like this. Simply delightful!

What host are you using? Can I get your affiliate link to
your host? I wish my web site loaded up as quickly as yours lol
Feel free to surf my web-site : papillex.com

What a stuff of un-ambiguity and preserveness of valuable
knowledge on the topic of unexpected feelings.
my web site > 3dwise.co.uk