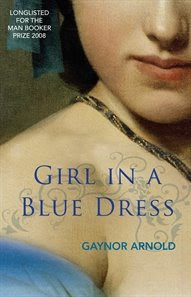 I bought Girl in a Blue Dress when I was in Sydney a few weeks ago - every bookshop I walked in had it displayed rather prominently so I was "forced" to at least take a look. The cover did entice me - I enjoy reading books about female characters by female authors so this book did fit that description - and I find the cover pretty and sensual - the picture of the lower part of the face of a young girl with what I would imagine was a pretty revealing blue dress for the Victorian era - it was drawing me in (I think the UK and US covers might be different to the Australian one though??).
Before I purchase a book I always read the publishers blurb (not always reliable I know but I need something to go by) and I also like to read the blurb about the author - it was actually the latter that made me finally purchase this book. Gaynor Arnold is actually a social worker by day and a writer by night - exactly what I would like to be! I have the social worker by day thing covered - just need to get working on my night time persona. If I can connect with an author in some way through their limited description on the back cover I will almost always take the risk and buy the book - I have been known to purchase a book simply because the author was born in the same year as me!
I have to say I did purchase the book for another reason - it's connection with the Charles Dickens story. Having just finished Wanting by Richard Flanagan I have been searching out books related to the life of this writer. As I said in my review for Wanting I have never really read much about Dickens himself or the life he led so I am wanting to discover more about this "character" - even if it is only a fictional account.
Which leads me to Girl in a Blue Dress - a novel based on the marriage of Charles Dickens and his wife Catherine through the use of fictional characters that embody their persona's and situations - Alfred and Dorothea Gibson.
The book is told from the perspective of Dorothea as she reflects on her life with "The One and Only" following his death:

My husband's funeral is today. And I'm sitting here alone in my upstairs room while half London follows him to his grave (p. 1)
As I have said, I am not all that familiar with the real story of Dickens and his marriage, and Arnold makes it quite clear in her Afterward that even though the marriage of Charles Dickens was the inspiration for the book it is a work of fiction and she has changed many things about the story. Arnold goes on to say; "In spite of these alterations, I have always attempted to keep true to the essential natures of the two main protagonists as I have come to understand them". I would love to hear from any of you who have a deeper knowledge of the life of Dickens than I have and who have read this book - is it close to the real story do you think?
I did not find my lack of knowledge about Dickens a hindrance when reading this book at all - in fact, I think it probably helped me to engage with the story more for what it was as opposed to always thinking "that's not right" or "that never happened".
Arnold tells a brilliant story (and apparently the judges for the Man Booker Prize made this comment when they longlisted the book for the award in 2008) - I was engaged with Dorothea and her telling of her story from the very beginning. Why is the wife not attending the funeral of her husband? Why is she hidden away in a room while the rest of London grieves openly? You are caught from the very beginning.
Dorothea begins to reflect on her life with Alfred as the funeral goes on without her, she tells of their initial meeting and the passionate courting that occurred without the permission of her parents. Once married the passion seems to be exchanged for reality, work and pregnancy. Alfred becomes absorbed in and consumed by his writing and Dorothea gives birth to 8 children in fairly quick succession:
Sometimes I did not think Alfred liked me so well as a woman. He did not like to see me retch, or sweat, or toil up the stairs with my gown kirtled up and panting with shortness of breath. He would look away and laugh, talking of my interesting condition as if I had grown stout of my own accord, as an act of contrariness; as if he had nothing to do with it (p. 94)
The picture painted of Alfred Gibson is not a pretty one - he appears as selfish, self-absorbed, cruel and arrogant. His treatment of his wife (admittedly as told by the wife herself) is horrific - even though no physical violence is ever portrayed the verbal abuse, isolation, betrayal and character assassination that Dorothea endures through the words of Alfred renders her a lonely character cut of from her sisters, her friends and most importantly her children.
Despite this Dorothea remains firm in her love and admiration for Alfred - something which I did struggle with throughout the book. I had to keep in mind the era in which the novel was set and the expectations of woman, particularly married women, of this time. There is a slight change in Dorothea towards the end of the novel where she does make a claim for the rights of woman when speaking to a close friend:
"Yet all the same how can it be proper for a woman to be married twenty years, then cast aside on a pittance? How can we lose the right to see the very children we have raised? Why do we need to go cap in hand for every bit of money that we need? If woman made the laws, wouldn't things be different? (p. 404)
The author's writing style is also based in a strong narrative - you do feel as though Dorothea is in front of you having a conversation about the life she has led with her husband. However, the books seems quite long in places - at times I found Dorothea's reflection repetitive and overly sentimental - but the author does not indulge in these passages for too long before changing the scene so in this way I was always kept interested and engaged.
Apparently it took Arnold 5 years to write Girl in a Blue Dress - I hope she seriously thinks about putting social work on the back burner for a while so that we can read her next novel sooner rather than later.
Posted by Karen at 2:30 PM

Not yet available in Quebec, Canada... I just love the cover! I'll fall for it for sure if displayed somewhere! :)

Hi Jules - yes, the cover is definitely a winner! It's a shame its not available in Canada as yet - do you think it will be available soon?

I really can't say. It might be already available in the english provinces but since I live in Quebec, the only french province of Canada, it might take longer! And forget the translation, it's going to take years!!! ;)

Hi Jules - sorry to hear that! I thought we had things bad in Australia in regards to the release of books.

There is a fairly new book out called Drood which is written by Dan Simmons. This one is written through the character of Wilkie Collins about Charles Dickens as far as I know.

Hi Marg - I would definitely move this one up your list. I have heard about Drood - I am looking out for Dickens related books now - and I have a hold on it at my library.

This sounds very good - and I'm sucked in by that cover, too. I'm going to keep my eye out for it.

Congrats on your bloggiversary!

Thanks Tara - yep, would definitely recommend this one - a great read.

I heard about this one and Drood just the other day! I am definitely putting both on my "watch list".

p.s. what did you think of Wanting as I have that one on my tbr shelves?

Hi Nutmeg - I've got Drood on hold at my library at the moment - I never thought I would find Dickens this interesting! I loved Wanting - a beautifully told story I thought. I did do a review on it a few weeks ago.