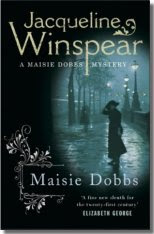 I have never really been much of a mystery reader - I'm not really sure why, just haven't been drawn to them in the past. But I have been reading some wonderful recommendations in the blogging world for various mysteries and in particular Maisie Dobbs by Jacqueline Winspear. I have been reading a little differently this year, trying different genres and styles of books I have previously avoided or just simply not gotten to - so I have decided to give the mystery novel a go.
I love reading books set in England - particularly around the times of WW1 and WW2 - so in that regard Maisie Dobbs was a great choice for me.
Maisie is a woman who started life as a member of the working class, she began working as a maid for Lady Rowan Compton and her family in the early 1900's. Her natural instincts for reading and learning drew her to the attention of her employer in another way and Maisie began to be mentored by Dr Maurice Blanche, with the support of Lady Rowan, in the ways of the intellectual world. Maisie eventually won herself a place at Cambridge University but this was interrupted by the arrival of WW1 where Maisie went to serve as a nurse in France.
The book starts in 1929 where Maisie is beginning to set up her own personal investigation business and it sweeps back and forth between 1929 and the past where we learn of Maisie's introduction to the world of investigation and her involvement and personal losses in WW1.
I did enjoy reading this book, and I will continue to read the others in the series, but I did have some problems with the plot development (which I thought was pretty predictable and simplistic) and Maisie herself.
Things just seemed to jump into place in terms of the plot - people were where they needed to be when they needed to be, people were conveniently met when they needed to be met etc... I found this a little contrived but I was able to see past it to still enjoy the story.
As for Maisie, she did annoy me at times! I was trying to work out what it was when Maisie herself seemed to describe the reason for me:
She knew she was out of bounds. But this was not new for her. She spent much of her life out of bounds, living and speaking where, according to some, she had no business.
This is normally a trait that would endear me to a character, particularly a female one, I love to read about strong female characters, but for some reason I found Maisie overbearing and bossy at times - particularly with her clients who she felt it was quite ok to order around!
I realise I am probably being a little harsh - and I need to place the character in the context of her times.
I also struggled with Maurice - jumping into Maisie's mind constantly with his little philosophical mantras!
But for all of these complaints I did enjoy the story - the setting in particular. So, I will give Maisie Dobbs another go but would also love to hear of any other suggestions for mystery books as I feel a little addicted now!
Posted by Karen at 3:27 PM

I have this series on my TBR list to read someday. My original plan was to finish reading the Phryne Fisher mysteries by Kerry Greenwood which also is set in this time period.

I was never a big mystery reader either, until I started blogging and reading book blogs. I prefer the more psychological/character based mystery rather than the who-done-it sort of thriller. Favorites of mine include:

The Beekeeper's Apprentice (I just wrote about this one)

Susan Hill's crime series, The first is The Various Haunts of Men

I am going to try PD James and Minette Walters.

Hope you find more that you enjoy!

Perhaps Maisie will grow on you if you read more? She can be a little bristly--I think it is just her personality and the times. I just clicked with these books and look forward to each new one. However, there are lots and lots to discover when it comes to crime/detective novels, so keep trying them as I am sure you'll find some you'll enjoy!

I've read the first four books in this series, and while I enjoy them (the last one I read was dreadful, though), I agree with you that Maisie can be hard to take at times. Sometimes she's just so hard and unsympathetic that you just want to shake some empathy and human feelings into her. Also, I find the whole "empathic psychic" thing a bit flakey, but I still like the books quite a bit.

Obviously the other similar author to suggest is Agatha Christie! Who is Maurice modeled after if not good old Hercule Poirot?

Hi Marg - I love the Phryne Fisher books!! I completely forgot that they were mysteries and that I loved them so much!

Hi Tara - I have heard lots of great things about Barbara Vine so I will have to look out for her books - thanks! I've also read lots of good things about The Beekeeper's Apprentice too and have just picked it up from my library.
Thanks for all of the great suggestions.

Hi Danielle - I will definitely give Maisie another go - I'm not really sure why I didn't click with her but there was enough in the book that kept me interested and enjoying the read.

Hi Steph - I know what you mean!! I will give the next book in the series a go and see how I feel, if I want to do more shaking I might just have to walk away!

Appreciating the time and effort you put into your website and in depth information you present.
It's good to come across a blog every once in a while that isn't the same outdated
rehashed information. Excellent read! I've bookmarked your site and I'm adding your RSS
feeds to my Google account.

Stop by my web-site sds tree