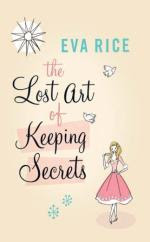 The title alone would have drawn me to The Lost Art of Keeping Secrets even if I hadn't read good things about it over at Danielle's Blog.

The Lost Art of Keeping Secrets is set in 1954/1955 London and England (with a lot of references to America and the rising pop music scene of the times as well). Penelope Wallace is an 18 year old on the cusp of "finding out who she really is" when she meets Charlotte while waiting for a bus. Penelope is introduced to another world and way of living through Charlotte (a character I have to say I liked a little more than Penelope) and Charlotte, her Aunt Clare and her cousin Harry become a part of Penelope's family life in the majestic country home, Magna. In some ways it is actually Magna that is the main character of the story - as the family home of Penelope's father who was killed in WW2 it maintains a significant hold on Penelope and her mother and brother and draws on their ever dwindling financial situation.
This book definitely made me feel as though I had been transported to 1950's England - it felt true to the period (even though I have never actually been in that time of course!) and I felt connected to the characters and what would eventually happen to them. Music plays a large role in the setting and the plot of the story and I felt that the developing pop music world was somehow echoed in the changing of the times following the end of WW2 and in the establishment of the "teenager" - seen through the eyes of Penelope and Charlotte and their devotion to a pop music icon.
A beautiful, sweet book - perfect for reading in front of the fire with a cup of tea!
Posted by Karen at 3:36 PM

I'm enjoying this one as well, though I had to set it aside to finish a couple of other books. I'm looking forward to getting back to it!

First time I've heard of this book (although I might've before but ignored it). It sounds so nice, like a feel good read. Might add to TBR, thanks.. :D

P.s. And the cover is so pretty.

Hi Danielle - I thought you has already finished it - sorry! Thanks for letting me know about it.

I will have to look out for this, and save it for when I need cheering up.

Hi adevotedreader - I think that would be the perfect time to pick this book up!

Now I'm really coveting this one! I hope my library has it. :D

Hi Eva - I was surprised to find my library in Australia carried the book - it actually has pleasantly surprised me a few times so I hope yours does the same!

I have this one somewhere in the stacks. It does sound very good and one of these days I will read it!

I like your cover copy too - so different than the U.S. edition.

Hi Iliana - I was actually disappointed when I saw our cover - I thought the US one was a lot nicer!

I loved this one. I got it from the library and now I need my own copy. It was wonderful. Reminiscent of Rosamunde Pilcher in many ways.

Hi Holly - I haven't read any R Pilcher - maybe I need to start??

I read this post fully concerning the difference of most
recent and preceding technologies, it's amazing article.