The Book of Tomorrow - Cecelia Ahern 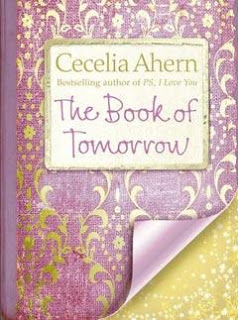 As I have written before, I'm not really sure what made me pick this book up in the first place. I was less than impressed by the author's last novel but for some reason I still found myself in a bookshop handing over my hard earned cash for her latest offering - it is indeed the silly season!
The Book of Tomorrow centres around 16 (almost 17) year old Tamara who with her mother is forced to move from her high society life in Dublin to living in the countryside with her less than promising aunt and uncle following the sudden death of her father. Tamara's mother is consumed by grief and is pretty much a non-existent presence in the book but Tamara manages to run into plenty of other characters to spend her time with, Marcus the mobile library hottie, Sister Ignatius the beekeeping nun who lives nearby, Aunt Rosaleen and Uncle Arthur, various adolescents from the local area and a mysterious hidden person living in the house next door. A lot of characters but very little substance unfortunately. The book of tomorrow of the title refers to an old fashioned book that Tamara borrows from the mobile library that is more than it first appears - it is obviously meant to be the crux of the plot but I found it to be quite contrived and silly.
I am not sure if the author was meaning to write an adult or adolescent novel here - even though the main character is only 16 herself there are some adult themes explored. The book is definitely readable and I was probably prepared to give it a go right up until the last 60 pages or so where the conclusion of the book completely lost the plot for me - it felt rushed and predictable with the consequences of certain actions unexplored or unexplained.
Glad to have finished this one now!
Posted by Karen at 3:00 AM

How disappointing! Although I really hated her last book, Thanks for the Memories. Well, it looks like I will be skipping this one. The thing is that she has written a few books that are good reads, so I wonder what has happened that her writing seems to have taken a turn for the worse. Oh well. I still have Marian Keyes new book to look forward to. Thanks for the post!

Hi Nadia - I'm not really sure, unfortunately I have only read her two latest books and they have both been very disappointing! I'm not sure I feel like taking the risk to read the earlier ones now!!

I felt the same as you about this one, I was a little disappointed as I have loved all of her other books!

Hi Dot - it sounds like her earlier books are much better? I probably should have started there!

Hello this is kinda of off topic but I was wondering if blogs use WYSIWYG
editors or if you have to manually code with HTML.

I'm starting a blog soon but have no coding expertise so I wanted to get advice from someone with experience. Any help would be greatly appreciated!

Check out my website ... low carb no carb foods

At this time I am ready to do my breakfast, afterward having my breakfast coming over again to read
additional news.

Simply desire to say your article is as astonishing.
The clearness in your post is simply cool and i could assume you're an expert on this subject. Well with your permission allow me to grab your RSS feed to keep updated with forthcoming post. Thanks a million and please continue the gratifying work.

Howdy this is kind of of off topic but I
was wanting to know if blogs use WYSIWYG editors or if you have to manually code with HTML.
I'm starting a blog soon but have no coding knowledge so I wanted to get advice from someone with experience. Any help would be greatly appreciated!

Feel free to surf to my page :: shrub stumps