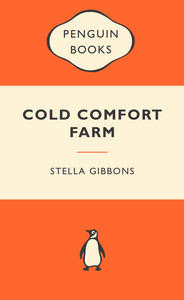 I had read/heard lots about Cold Comfort Farm (not really sure where now) so when I saw one of the new Popular Penguin editions of the book a while ago I snapped it up. I wasn't really sure what to expect from the book - although I knew it was an English novel written in the 193o's and that was enough for me to give it a go. My edition of the book also has an introduction written by Lynne Truss - which I saved to read until after I had read the actual book (and which I did find helpful at that point).
Cold Comfort Farm starts with an introduction to our leading lady;
The education bestowed on Flora Poste by her parents had been expensive, athletic and prolonged; and when they died within a few weeks of one another during the annual epidemic of the influenza or Spanish Plague which occurred in her twentieth year, she was discovered to possess every art and grace save that of earning her own living.
And so begins Flora's predicament - either stay in her beloved, social London, find a flat of her own and a job to support herself - or move to some far flung part of the countryside to live with distant relatives previously unknown to her. Much to my surprise (but thankfully for the plot of the novel) Flora moves to Cold Comfort farm in Sussex to live with relatives of her mothers - the Starkadders.
It is here that the novel takes its comic turn because the Starkadders are both ridiculous and hilarious at the same time and the interaction they have with city girl Flora has some very funny results and altercations. It did take me a while to pick up the intended tone of the novel, Flora swoops in determined to alter for the better her country cousins and while I did find her actions funny I also felt a little resentful of her nature - what right did she have to decide she was in the right and the Starkadders were the lost and hopeless ones?? I got to grips with the book in the end though and did end up enjoying it for the most part - Gibbons does tend to describe a lot of the landscape in her book and while I know this is necessary to set the scene, a little too much of it and I become a bit bored! Some very funny scenes though - this might be one I have to come back to in the future to fully appreciate.
Posted by Karen at 7:54 PM

I agree that Cold Comfort Farm is a book that probably has to be reread to appreciate or read about. She satirises books of the time and I think the lengthy landscape descriptions are part of that satire; it is very difficult to fully understand her tone without understanding the context and the books she is satirising!

I have always been intrigued by this book, but worry about Claire's comment - I wouldn't have a clue which books she was satirising. Perhaps I need to find out what they are and then read them first?!

This is a book that has gradually grown on me since I first read it. When I first read it, while I knew it was supposed to be funny, I didn't get most of the humor, in part because I'm less familiar with the books that Gibbons is satirizing here. In some ways I feel this is a weakness for the novel, but I think that having a better understanding of what the book is now, if I were to go back and re-read it, I suspect I would enjoy it a good deal more. Also, I watched the movie version (made with a young Kate Beckinsale) after reading it, and found that it helped me appreciate the book more as well, so you might consider giving that a try too!

Hmmm this is a book I have always believed I should read but my Gran says its really overated. She laughed endlessly at one scene but as she says 'one bloody funny scene doesnt make a good book or a classic'.

I do think some books are growers though.

Off topic from the book in your review, but I couldn't find an email address on your blog (did I miss it?) and wanted to thank you for the Persephone. It was the perfect choice. I absolutely love it! I gushed a bit more here. Thank you so much! I hope you have a wonderful Christmas. :)

Hi Claire - I thought that was probably the case. I could enjoy the book simply on face value to a certain extent but I knew I was missing so much more!

Hi Jackie - That probably wouldn't be such a bad idea - I think the reading of CCF would be enhanced by having that pre-knowledge about those other books.

Hi Steph - I think watching the movie version is a really good idea - that is usually how I come to understand and appreciate some books.

Hi savidgereads - I love your Gran's comment and agree with her! I might come back to this book in the future but I don't think it will be anytime soon.

Hi Natalie - I am so glad you love your Persephone! I have been over to read your post and have made a comment there too.

Yes, I've always thought this book a little overrated, too. The first time I read it I didn't even realise it was supposed to be satire and I couldn't work out what was going on!

Oh dear, damned by faint praise! I loved Cold Comfort Farm from when I first read it and am perhaps blind to its faults.

I don't think you necessarily need to have read Hardy, Mary Webb etc for it to be funny (I hadn't). A question of taste I guess.

Hi Vintage Reading - it took me a while to work things out too! Then I couldn't decide if I liked Flora or just found her obnoxious!!

Hi adevotedreader - I agree - I think this is very much a style of book that will appeal to some and not others. I definitely liked parts of it but as a whole probably not so much if that makes sense??!

Having spent my formative years reading the dark brooding novels of D.H. Lawrence that Gibbons mocks so wonderfully in this book, this novel is near and dear to my heart, and you're right, it does improve on rereading, especially once you realize the whole thing is tongue in cheek.

The movie is a pretty good adaptation of the book if you're considering watching it, but you still never see what is nasty in the woodshed!