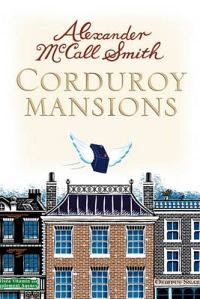 2009 has been a bit of an Alexander McCall Smith year for me - I discovered his Scotland Street series earlier in the year and devoured the books in that collection quite quickly. When I saw Corduroy Mansions had been published I was very excited - I could continue my obsession!
Corduroy Mansions is pretty much just an English version of the Scotland Street novels. A lot of the characters seem similar in stereotypes and ways - and yet they retain their own individual quirks and traits as well. I fluctuated when reading this novel between finding the sameness and similarities in character design annoying and boring and then finding it comforting and safe - which is sometimes just what I am looking for in my reading. I picked up the new Alexander McCall Smith novel because I knew what I would be getting - and he didn't disappoint me in this regard.
The Corduroy Mansions of the title is a block of flats in the London area of Pimlico and the chapters focus around the various residents of the building as we as their numerous acquaintances and relatives. Unlike the Scotland Street series there wasn't a character like young Bertie who really stood out for me as a favourite and it was probably this fact that was most disappointing about the novel for me - there was no one character that I genuinely cared about. Apart from this though there were a great selection of characters to follow - the style of McCall Smith's writing and the way he structures his chapters means that if you are bored with one particular story line another one comes along very quickly to entertain you.
The sequel to Corduroy Mansions, The Dog Who Came in From The Cold, is currently being published online and I have tried to give it a go - but unfortunately it just isn't holding the same appeal for me. Maybe I will need to wait until it is published in book form...
Posted by Karen at 12:01 AM

When I first heard about this new series it sounded so similar to Scotland Street that I couldn't figure out why he'd produced it (except to show that there are the same kind of odd characetrs in England).

I've only read a few of The No.1 Ladies..., and have been wondering about his other series. Maybe I should give Scotland Street a try.

I read Corduroy Mansions and am now listening to The Dog Who Came into the Cold daily. I am finding the sequel much better, but I think this is because the book works best in serial form and I am also enjoying listening to it more than reading it. I recommend that you try the audio and see if you find that any better.

I know he has so many fans, but I just have never been able to get into AMS's books! I bought a copy of the first book in his No. 1 Ladies' Detective series many years ago and tried it twice before deciding it just wasn't for me... I haven't tried anything else by him, so I wonder if I might have better luck with something else?

Have you tried downloading the podcasts for the sequel novel? I have found that a really great way of taking it in serial form with a listen to six once a week.

I will definately be reading the new one when it comes out in book form. I loved Corduroy Mansions and as I live in London it caught me more than the Scotland Series which I must, must read more of.

I love McCall Smith's Edinburg books, but like yourself have been less convinced by Corduroy Mansions. I still enjoyed it , just not so much as a Scotland Street or a Isabel Dalhousie book. He isn't a surprising writer, but he is a comforting one.

I'll wait for the sequel to be published in book form, as I don't like reading large amounts of text online ir listening to audiobooks. I hope it improves!

I'm looking for some lighter reading to balance out my George Eliot reading in 2010 and both series sound great. I enjoyed the #1Ladies series (though I haven't read them all yet) and the Sunday Philosophers Club, so I'll check these out--v. interested in books set in Edinburgh these days.

Hi Jodie - It did feel very similar to the Scotland St series - but it had it's own quirks as well.

Hi JoAnn - I definitely liked the Scotland St series better than this one.

Hi Jackie - that's a good idea - this series might work better for me in audio form. Thanks!

Hi Steph - I think if this author is not for you just move on! I always try to "make myself" like authors that seem so popular with so many other readers and I end up just feeling frustrated!!

Hi savidgereads - thanks for the suggestion - I did digest this book all in one go and I think it would have been much better spread out a little more.

Hi Sarah - comforting is definitely the right word! Sometimes that is just what is needed.

Hi Jane - this sounds like it would be a great choice to lighten up your heavier reading.