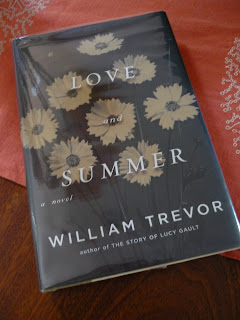 Love and Summer was probably as close as I will come to reading, and enjoying, poetry. The book flowed so beautifully for me it felt like a novel written in lyrics - a gentle love song.
The book is set in a small Irish country town sometime after the war period (the exact time of the book's setting is never clearly defined and it was something that bothered me for a little while until I realised it didn't really matter and I let go of my obsession!).
The simple and yet directive title indicates the heart of the novel - it is a love story taking place in the summer months as a local farmers wife, Ellie, meets a young budding photographer at the funeral of a local woman;
While such recollections were shared, and the life that had ended further lauded, a young man in a pale tweed suit that stood out a bit on a warm morning surreptitiously photographed the scene.

Dark-haired and thin, in his early twenties, the young man was a stranger in Rathmoye. A suggestions of stylishness - in his general demeanour, in his jaunty green-and-blue striped tie - was repudiated by the comfortable bagginess of his suit. His features had a misleading element of seriousness in their natural cast, contributing further to this impression of contradiction. His name was Florian Kilderry.
Florian is the process of selling his families run down house and estate after the recent death of his father, his mother having died some years before. As he goes through the process of packing up and in some cases discarding the elements of his home we learn about his childhood - the deep love of his parents and his upbringing as their only child. Florian is intending to leave Ireland for good once the house is sold.
Ellie is an orphan who was raised by nuns until she was chosen to go the home of kindly widower Dillahan and eventually marries him after becoming a companion to him in his grief;
Younger by several years than her burly husband, she had something of the demeanour of a child. Yet while childhood still influenced this expression of her nature it was a modest beauty that otherwise, and more noticeably, distinguished her now. It was there in the greyish blue of eyes that had once been anxious, in the composed smile that had once been faltering and uncertain. Soft fair hair, once difficult was now drawn back, the style that suited it best. But in the farmhouse, and the yard and the dairy, in the crab-apple orchard and the fields, though touched by the grace that time had brought, Ellie Dillahan remained as diffident a presence as she'd been when first she came here as a general maid.
The relationship and connection between Ellie and Florian builds gently as they go about their daily tasks - Ellie taking care of her husband and house and Florian preparing to sell his home and move abroad. The community and the people who live in it are cleverly and yet subtlety intertwined with the two young people with sub stories being explored with great skill.
The building of the love story is wonderful - I was on the edge of my seat waiting for it to develop and yet at the same time I wanted it to take time - longer than summer had to offer.
They left their bicycles where they were. Yes, she had time, Ellie said as they walked away from them, time enough. It wasn't like being in Rathmoye, on the streets, among people, being frightened. There was a calmness and, as if she were alone, she belonged in its quiet. He held the barbed wire apart while she scrambled through it, and helped her again where a tree had fallen across the avenue. When he gave her his hand to take it was the first time they had touched, and still the calm was there.
Just beautiful.

I read this over Christmas and also thought it beautiful. Want to read some more Trevor but not sure where to start.

What a lovely review. I had seen this book around but hadn't heard any word-of-mouth on it. This definitely makes it far more enticing. Thanks.

I have had this on my to be read pile for ages and your lovely review has bumped it up to priority level.

Hi Verity - I'm the same. I'm ashamed to say that I hadn't really heard anything about Trevor until I read this one.

Hi thecaptivereader - It was a gorgeous book.

Hi Bloomsbury Bell - I hope you enjoy it as much as I did!