Playing With The Grown-Ups - Sophie Dahl 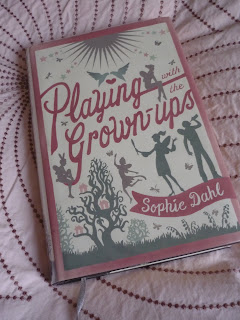 I chose to read Playing With The Grown-Ups after finishing To The Lighthouse as a bit of light(er) relief from long, intricate prose.
The book has been described by some as a modern "I Capture The Castle" - one of my favourite books but this comparison meant it had big shoes to live up to for me. The novel is the coming of age story of Kitty Larson, eldest daughter of Marina - a woman portrayed as a loving and creative mother on one hand but also a lost, searching soul on the other. Kitty's life starts off with her mother and beloved grandparents in rural England, Marina goes on to have two more children (twins, Sam and Violet) and the family spend their lives moving between England and New York as Marina's painting career and whims carry them along. Interspersed with the story of growing up are scenes set in current time where an adult and newly pregnant Kitty is living in New York with her husband when she is called by her younger sister in London to say that something has happened to their mother.
Overall I did enjoy this book and Dahl's writing had depth and yet was easy to read. I did like the first half of the book more so than the second where I thought a lot of things went unexplored and I would have liked more resolution from the ending as well. This is not usually a big thing for me in my reading but for some reason (maybe my connection with the character of Kitty??) I was left wanting just a little bit more of the story fed to me. Loved Dahl's writing though and would definitely go back for more of her work.
Posted by Karen at 8:27 PM

Yet, this book does sound really good, and as I absolutely adore I Capture The Castle, I'll definitely be getting to this one soon-ish.

I have never heard of this author but it sounds pretty interesting, I will keep my eye out for it! Sometimes its nice to read something light.

How dangerous to compare a book to I Capture the Castle. Can anything actually live up to that?

Interesting review. I'm looking forward to reading this one myself.

So maybe in the end it wasn't quite as good as I Capture the Castle? You're right when you say it's a pretty hard book to follow, so it would take something really special be able to match its caliber.

Sounds interesting though, and I haven't heard much about this author. I'll keep an eye out for her!

I've been curious about this so I am happy to see your review. What a lot to live up to by comparing this to I Capture the Castle!

Like anothercookiecrumbles I am always wary of books claimed as the modern version of such and such.

I am also sloghtly wary of Dahl writing because of the other Dahl but am now looking forward to this one, if I manage to get round to it!

Hmmm, in a quest to have a good selection of lighter books at the ready, the comparison to I Capture the Castle makes this appealing. Is Sophie related to Roald?

It's no I Capture the Castle but still highly enjoyable although I agree with your points about resolution and first half.

I loved The Man With the Dancing Eyes and follow all of Sophie Dahl's ventures with interest (I am at present coveting her cookbook) but her writing is what mainly interests me.

Oh definitely not I Capture the Castle! But it was good for unfettered light reading, was it not? Just not as loveable and enchanting and heartwarming as I Capture.

Like Claire, though, I recommend The Man with the Dancing Eyes. That is such a lovely book. But it's very short and has illustrations so while you'll read it in a zip, it's a definite keeper. :)

I don't think I'd want my book to be compared to a classic - the pressure!

I note all the comments about the comparison to I Capture the Castle - what a weight to bear for any book. I have seen this one at my library and may pick it up now as you have interested me in her style of writing now.

Hi anothercookiecrumbles - I understand your wariness - I feel a similar way!

Hi Becky - She's a great writer I think Becky - I would definitely recommend her to you.

Hi thecaptivereader - That is so true - I think it would actually be a scary thing for an author to read a comparison like that - so much pressure!

Hi Steph - it was interesting and definitely a good read in its own right I think.

Hi Tara - I hope you enjoy it if you decide to pick it up.

Hi Simon - I think Sophie does a great job with this book - I haven't read any of her grandfather's work for a while now but I'm sure she has drawn inspiration from him in some ways.

Hi Jane - she is! He is her grandfather.

Hi Claire - I have her cookbook and it is just gorgeous - her writing is great throughout it too.

Hi Claire - I will definitely seek out her other book - her writing style was engaging and the books look delightful.

Hi Iliana - I completely agree! Totally way too much pressure.

Hi Samantha - it is a really quick and easy read so even if you don't think it is all that great you won't have wasted too much time with it.