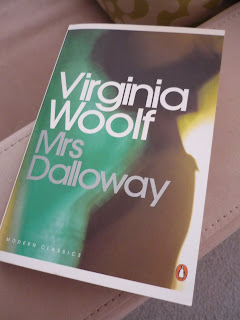 Mrs Dalloway is my very first Virginia Woolf read and I read it as part of The Woolf in Winter (or Summer as the case is for me!) Read Along. You can see other comments and posts about this book being collected by Sarah here.
This being my first venture into Woolf territory I must admit I wasn't really sure what to expect. Although I know a lot about Woolf's life I am ashamed to say that I didn't really know all that much about her actual writing. I am now VERY glad I have rectified that as based on what I have read in Mrs Dalloway I think Woolf will turn out to be one of my favourite authors.
The "stream of consciousness" writing style that Woolf adopts in this book took me by surprise - I felt captured by the characters thoughts and feelings and I found myself rushing along in my reading - I felt I was reading too fast to really appreciate the writing itself but I certainly didn't feel as though I was missing the essence of the story. I think this is the type of book that will need to be read again and again, each time concentrating on a different aspect.
I loved the setting of London in the 1920's - descriptions of the city streets detailing a world possibly about to slip from existence;
Gliding down Piccadilly, the car turned down St James's Street. Tall men, men of robust physique, well-dressed men with their tail-coats and their white slips and their hair raked back who, for reasons difficult to discriminate, were standing in the bow window of White's with their hands behind the tails of their coats, looking out, perceived instinctively that greatness was passing, and the pale light of the immortal presence fell upon them as it had fallen upon Clarissa Dalloway.
Clarissa, Mrs Dalloway, is preparing for a formal party that she will host at her home that evening and in the course of the day we see her reflect on her youth and her past and prepare for her current and future life. In contrast to Clarissa there is the character of Septimus Warren Smith - a returned soldier suffering the effects of post traumatic stress (or shell shock as it was described as then). The way Woolf overlaps these two seemingly very different characters and their worlds is very clever and effecting.
My edition of the book contained a quite lengthy introduction which I went back and read after I had read the book - I was glad that I saved it until the end as it would have given away so much about the story but it has also helped my reflections on my reading in giving me more insight into Woolf's personal life at the time she was writing Mrs Dalloway and the process she went through in completing the book.
I think I am possibly a little overwhelmed by the power of Woolf's writing to say much more about Mrs Dalloway itself at the moment except that it will be a book I go back to - and I can't wait to read more Woolf!
Posted by Karen at 3:12 PM

Great review! Absolutely, you're right about it being a great book for a re-read. I read it about 20 years ago and am re-reading for this read-along. Glad you enjoyed it.

Yay, I'm so glad you discovered a new possible favorite author! She's definitely one of mine. I agree - the juxtaposition of Clarissa and Septimus is masterful, and the London setting is so tangibly present. Thanks for the lovely post!

The first time I definitely read the book too fast, and while I recognized that I LOVED it, I wasn't entirely sure why. The re-read was amazing. It felt completely fresh and new, and I picked up on way more. I'm so glad you liked it! :)

I have never read a Virginia Woolf book, but this review has made me absolutely want to!

So good to see we are on the same page, Karen! (We also have the same edition.) I wasn't so much overwhelmed as confusedly dazzled and disoriented. I didn't get all the nuances and subtleties, but thanks to the introduction (which I also treated as an afterword) and to everyone's eye-opening posts, I have come to a much better understanding of things. So enlightening!

This was my first Woolf as well (also read for Woolf In Winter). While I did find it slightly more difficult to get into the book, due to the stream of consciousness style of writing, once I was immersed, I was well and truly swimming.

I agree with you about the setting in London. In fact, I can almost imagine the book being set in present-day London, just due to the vivid descriptions and the beautiful writing!

I forget to mention the fabulous setting of 1920's London which I thought was wonderful. I am glad you enjoyed it so much, looking forward to To The Lighthouse.

Again, we have the text introduction in a classic work that reveals way too much of what is to come. They should put a disclaimer at top. Glad you saved it for the end though.

Glad your first read was a positive experience. And it is difficult to pace yourself when you are loving it, isn't it? The re-read is a topic brought up in a lot of comments about this book so know that you are in good company.

The London setting was delicious wasn't it? One of my favorite sequences of the book. Hope you will be joining us for To the Lighthouse. That cover design you have in your sidebar is gorgeous.

I brought Mrs Dalloway along on my trip to London last May and didn't read it, such a shame. My B&B was around the corner from Gordon Square in Bloomsbury though, I stood there gazing at the step, picturing Virginia going in and out. Mrs Woolf & The Servants is a wonderful book for finding out more about life behind the scenes in the Woolf household if you're interested!

This was my first reading of Woolf, too, and I think our reactions are very similar. Now the choice is whether to reread Mrs. D right now, or move on to To The Lighthouse.

Karen, I felt much the same about the book. I especially found myself reading the book too fast, Virginia's style just pushed me forward! This is definitely a reread book, as I also think perceptions and opinions will change not only as we understand more of it but as our positions in life change.

I know now that I read it too quickly too. And I had no idea how many in the reading group had read it before until I read all the comments. I missed much I think. My old copy had no introduction or readers notes so nothing to clue me in before hand. I like the descriptions of London very much too.
A very nice review. I look forward to reading more of her fiction too.

What a great review! Mrs. Dalloway is definitely a great book by Woolf. I'm so glad to read how much you enjoyed it. I have always loved Woolf's ability to create such wonderful stories with her stream of consciousness writing style - everything just seems more detailed and involved. Cheers!

Hi Melissa - I don't know how long to leave between my first and second readings for this one. Hopefully it won't be 20 years!

Hi Emily - As much as I loved Woolf's writing I'm not sure if I would have loved this book as much had it been set somewhere else - but then it wouldn't have been Mrs Dalloway would it??!

Hi Sarah - I know what you mean - this is such a different sort of book for me to have read that I think it will take me some time to work out what exactly it is about it that I love so much.

Hi Becky - I really hope you enjoy it as much as I did. I don't think I would have read a Woolf book without the read along that has been organised - another great thing about the blogging world!

Hi Claire - I completely agree - I've gotten so much more out of my reading of this one by joining in and reading everyone elses thoughts and ideas.

Hi anothercookiecrumbles - I know what you mean - I was imagining myself walking along some of the streets as they were being described. It made me miss London!

Hi Simon - I know! I wish I could visit London at that time!

Hi Frances, yes - I've been caught my introductions before so I always save them for last now! I'm really looking forward to To The Lighthouse after such a great first Woolf experience.

Hi Darlene - that would have been such a beautiful place to stay. I have heard of that book before and am really interested to read it.

Hi JoAnn - that is a decision - I think I'm going to move on to To The Lighthouse next - I think if I re-read Mrs D now I would just rush through it again!

Hi Victoria - that's exactly what I think too - I love how reading books at different times of your life makes them have different meanings.

Hi Sandra - I think that one of the things that has been so great about reading Woolf as a group - I have learnt so much from hearing from other readers.

Hi Nadia - you really feel like you are in the character's minds don't you??