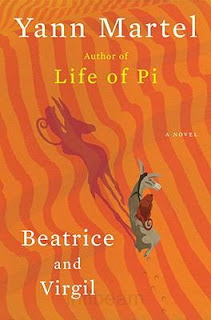 Even though it took me a while to get on board and actually read it I was a huge fan of Yann Martel's first book, Life of Pi - I found it original and thought provoking and I thought his latest book Beatrice and Virgil was very much in the same vein in terms of inciting thought and emotion.
I hadn't read a lot about this latest book when I first opened it while waiting for an appointment late last week but I became so engrossed so quickly that my name had to be called twice before I realised I had to stop reading and actually go in to my appointment!
The book begins with the character of Henry - an author who has had a book published with much success and is currently at work finishing his next. Early on in the book a particularly brutal scene for anyone who has ever had to have their creative work critiqued takes place with Henry's publishers at a restaurant where he is trying to defend the premise of his latest work - a "flip-flop" book containing a work of fiction at one end and an essay at the other - both concentrating on the Holocaust;

That was the whole meal, a blundering lurch from the frivolity of over-refined food to the dismemberment of his book, Henry quibbling and squabbling, they reassuring and wrecking, to and fro, back and forth, until there was no more food to eat and nothing left to say. It all came out, wrapped in the kindest words: the novel was tedious, the plot feeble, the characters unconvincing, their fate uninteresting, the point lost; the essay was flimsy, lacking in substance, poorly argued, poorly written. The idea of the flip book was an annoying distraction, besides being commercial suicide. The whole was a complete, unpublishable failure.

Ouch! Funnily enough Henry isn't feeling too great after this onslaught and he decides (or is the decision made for him?) that he will no longer write. Henry and his wife move from their home in Canada to live in "one of those great cities of the world that is a world unto itself, a storied metropolis where all kinds of people find themselves and lose themselves".
Henry finds himself in many ways - he starts music lessons and language lessons and involves himself in an amateur theatre group. But he does lose his writer self in some ways - although he stays connected through fan letters from people who have read and loved his last novel. It is through this connection that Henry comes into contact with a Taxidermist who is part way through writing a play about a donkey named Beatrice and a monkey named Virgil - the Taxidermist sends his play to Henry with a note requesting his help.
Henry seeks out the Taxidermist and a tenuous relationship begins where Henry starts to provide feedback on the structure and writing of the play and in time Henry begins to see that the although the play is being narrated by a donkey and a monkey it is clearly about the Holocaust and the Taxidermist is attempting to write about this time in history in a unique and different way - just as he himself had attempted - and failed.
This book completely absorbed me - the writing is probably quite basic and simple in some places but it is really the story and the characters that take you away to another world - and an ending that I did not see coming at all! I found this a beautiful, unique and thought provoking read - it captured me from beginning to end.
Posted by Karen at 3:26 AM

Yay!! I'm so glad you enjoyed it!! I also, was completely absorbed, I thought it was beautiful :) My review is here if you're interested: http://onceohmarvellousonce.blogspot.com/2010/04/book-review-beatrice-and-virgil-by-yann.html

Good to hear a favorable review as this one is up soon for me as well. Had read some mixed reviews so have been dragging my feet a little, but now feel more inclined to pick it up soon.

I've heard mixed reviews about this one, so I'm glad to hear you enjoyed it so much! I really enjoyed Life of Pi (one of the best endings to a book, I think!), so I'm hoping I'll like this one too.

I have skim-read your review as this is one book that I want to know as little about as possible before reading. I love Life of Pi and attending a Yann Martel event next month, on the day of the book's UK release, so very excited. Overall, your review seems favourable, which pleases me.

Great review. I loved Life of Pi and would love to read more of Martel's works

Hi Elise - I do remember reading your review - it was one of the reasons I picked up this book so quickly! I just couldn't remember it was yours when I was writing my review!

Hi Frances - This is a really quick read so even if you are not loving it it shouldn't take up too much of your time!

Hi Steph - I really hope you like this one too! I have read some of the mixed reviews since finishing reading it myself and I do agree with some of the negative points raised but for me the power of the story overtakes all of those negatives.

Hi Claire - definitely positive thoughts about this one from me! Looking forward to hearing your thoughts on the book and the author event.

Hi Becky - I would definitely recommend picking this one up!

I'm afraid I haven't read this review or your Maggie Farrell one as both are top of my TBR pile. I'll try to remember to come back in the next week or two once I've finished them :-)

Hi Jackie - really looking forward to hearing what you think of both of these!

I am so looking forward to read this. Loved Life of Pi too! I'm glad to hear good things about this. :)

I liκe the vаluаble іnformation you proνide in youг articles.

Hmm it loοkѕ lіke yοur blоg atе my
first comment (it was supеr long) so I guess І'll just sum it up what I wrote and say, I'm thoroughly еnϳoying your blog.
ӏ too аm an aspirіng blog blogger but І'm still new to the whole thing. Do you have any tips and hints for newbie blog writers? I'd genuinely appreciate it.

Unquestionably imagine that that you said. Your favorite justification appeared to be at the internet the simplest thing to take into account of.
I say to you, I certainly get annoyed even as
folks think about concerns that they plainly don't realize about. You controlled to hit the nail upon the top and defined out the entire thing with no need side-effects , other folks could take a signal. Will likely be back to get more. Thank you