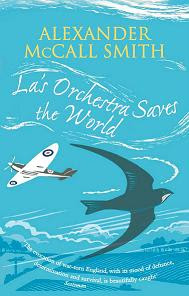 As a huge Alexander McCall Smith fan it was really only a matter of time before I picked up his stand alone novel La's Orchestra Saves The World. It jumped out at me at a recent trip to my library and after reading the first few lines I was drawn in - as I find happens with most McCall Smith novels - he sets up a world and characters you want to learn more about.
The main character, La (unfortunately short for Lavender she explains during the book) is a woman in her late 20's who moves from London to the Suffolk countryside shortly before the start of World War 2 after her husband runs off to France with another woman. La is an intelligent, educated woman who has concerns about moving to a small village but after her husband leaves she feels she needs to move away from London for a time. As La is learning to fit into village life Hitler is gathering power in Germany and World War 2 begins and after a chance encounter with a fellow music lover the decision to start a small village orchestra to boost moral is made. This event does not come until quite late in the book and to be honest I had completely forgotten about the fact that it was coming up - even with the title of the book making it very clear! The creation of the orchestra seemed to come out of the blue - by that stage I was enjoying reading about La and her daily life - the challenges she was facing in becoming a "local" and dealing with the impact of the war and the personal relationships she was building - I didn't actually need the orchestra to focus the book in any way.
I found this book to be a very different reading experience to the other McCall Smith novels I have read - this book seemed a lot heavier and dealt with issues in a much more serious way than some of his other books I have read such as The Scotland Street series. Obviously the setting of the book in the midst of World War 2 has contributed to this tone.
Overall it was the character of La that made this book for me - I was so glad that McCall Smith carried on to let us see what had happened to her after the war had ended - it was just right.
Posted by Karen at 1:38 AM

This was the first Alexander McCall Smith I'd read. I enjoyed the description of rural life during the war, and reading all about La's life.
I've never read any other of his books, none of them realy appeal that much, even though I did think the writing in this was lovely.

This is the first and only Alexander McCall Smith book I've read and I particularly enjoyed it because I play violin in an orchestra and ours is similarly mish-mashed!! So enjoyable!

I am a big fan of a couple of AMS's series. I had borrowed this from the library not too long ago, but I had to return it unread. Will have to make the effort to borrow it again.

Hi Jo - I thought this novel was written a little differently to some of his others - can't quite put my finger on what it was!

Hi Elise - I can see why this would have been a great read for you!

Hi Marg - I would suggest re-borrowing this one!

This is one of McCall's books that really quite appeals to me, I did a post yesterday on how some of his books I love and others just pass me by. If you havent tried his african folk tales then do!

Hi Simon - thanks for the tip - I will check them out!