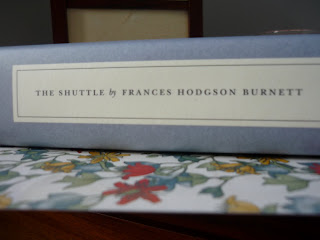 I have finally made my way to the end of The Shuttle which I had started as part of Persephone Reading Week way back at the start of the month.
I had ordered my copy of The Shuttle last year after reading, and absolutely loving, The Making Of A Marchioness by the same author. I had wanted to read The Shuttle as soon as it arrived at my house but I very patiently waited until Persephone Reading Week this year!
The Shuttle broadly tells the story of English gentleman from the country's upper classes heading across the seas to America to marry the wealthy daughters of that emerging country in order to attempt to bring the wealth and value back across to England and their failing estates and communities.
The Shuttle focuses specifically on one of these English men, Sir Nigel Anstruthers (possibly one of the most vile, evil and horrible characters I have encountered in literature) who marries sweet, innocent Rosalie Vanderpoel whose father is at the time one of the most wealthy American industrialists. Once Nigel and Rosalie are married they return to England to live on the Anstruther's dilapidated estate, Stornham Court. It is clear to the reader from the very beginning that Nigel has no love for Rosalie - he simply wants her money:
'I am supposed to be moonstruck over a simpering American chit - moonstruck! Damn!' But when he returned to his hotel he had made up his mind and was beginning to look over the situation in evil cold blood. Matters must be settled without delay and he was shrewd enough to realise that with his temper and its varied resources a timid girl would not be difficult to manage.
The Shuttle turned out to be a very difficult reading experience for me. I was still totally entranced by Hodgson Burnett's writing and her way of creating a world and characters for the reader to dive right into - the character of Betty Vanderpoel, Rosalie's younger sister, was my favourite by far;
'There are a good many girls who can be trusted to do things in these days', she said. 'Women have found out so much. Perhaps it is because the heroines of novels have informed them. Heroines and heroes always bring in the new fashions in character. I believe it is years since a heroine "burst into a flood of tears". It has been discovered, really, that nothing is to be gained by it'.
But overall I just felt frustrated and bogged down in the sadness of the novel and Rosalie's situation - being trapped in a loveless and hopeless situation. I am glad I stuck it out with the book though - the second half certainly offers more hope!
Posted by Karen at 6:19 PM

Perhaps I should just stick with her Little Lord Fauntleroy and her secret garden. What an accomplishment to finish though, after a book proves hard to read!

I started to read this book for Persephone reading week, but found it hard going. I realised that I wasn't going to finish it in time and so abandoned it. I hope to get round to it later in the year, so it is good to know that the second half is much better.

Hi Becky - I'm pleased that I stuck with it until it started to get a little more hopeful!

Hi Aimee - So many others have absolutely loved this one so I would say give it a go - you will know pretty early on if it is the book for you I think.

Hi Jackie - I completely understand why you stopped!

I have a copy of this (albeit on my ipod touch), so I would like to read it at some point. But I'm not really in the mood for emotionally difficult books at the moment, so I'll wait for a while!

I've only read her children's books (The Little Princess and The Secret Garden). Want to read this and The Making Of A Marchioness.

Glad you stuck through it, and the second half was better.

Hi Steph - I think it is definitely better to steer clear of this one for the moment then!

Hi anothercookiecrumbles - The Making Of A Marchioness is wonderful - definitely one of my top reads from last year.