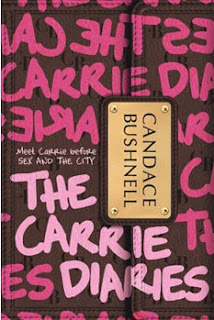 I was seeking some light relief from some of the heavier reading I have been delving into lately so I picked up my recently purchased copy of The Carrie Diaries - supposedly a sneak peak into the world of teenage senior Carrie Bradshaw before she made the move to New York and became the fashionista we know today.
I am a huge fan of Sex and the City the tv show but I have to say that I have never actually read any of Bushnell's novels before - and if The Carrie Diaries is any indication of what to expect from her books I won't be picking up another one in the near future.
I actually didn't think the writing style itself was that bad - the structure of the book overall just came across as so juvenile, repetitive and senseless. I know the focus is on the character of Carrie as a teenager but I thought the book would be directed more towards adult readers - it clearly isn't. I would definitely place this book in the adolescent fiction section. I'm not trying to be negative about adolescent or young adult fiction either - I have read some amazing books in this category - but this isn't one of them. All the book seemed to focus on was Carrie's up and down relationship with a horrible boy - now I remember all too well how relationships can dominate your life a a teenager but the premise given by the author seemed to be saying that Carrie had so much more to be thinking about and working towards - such as the death of her mother and her dreams of a writing career - but I felt these concerns played a minor role and were never really explored in any depth.
The only thing I like about this book was the last line - this is where the book should have begun I think.
I will be going back to Sex and The City the tv show to reaffirm my faith in smart, sassy women and good writing!
Posted by Karen at 1:14 AM

The tv show is so wonderful, I am not going to touch any books about sex and the city. How backwards is that! Tv before books :-)

I'm pretty sure that this book is being marketed to the YA market here in the States... but I have to be honest that I've never really been a fan of the show, so I'm not all that interested in the books either!

Hi Becky - I think in this case the TV before books idea is the best one!

Hi Steph - If you are not a fan of the show you should definitely stay away from this book!!

Here in Canada, I have seen the book in 3 bookstores and each time it was placed with the YA books, so I would say your feeling about the book is right on! I haven't decided whether I'll read the book or not, since I have both loved and hated the TV show... hmmm...

Hi Kay - I would say steer away from this one - but then again, if you are in the right mood and had the right expectations I think it could be ok.