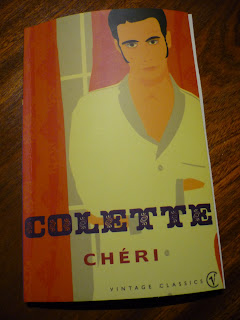 I am definitely being inspired by the imagination and input of bloggers who are participating in Paris In July - I'm not sure a month will be long enough to get through all of the reading, listening and watching I want to do!
My first read for the month was Chéri by Colette. I had watched the recent movie version of the book earlier this year and while I had enjoyed the visual aspects of the film the content left me a little disappointed. The book has changed that for me though - I obviously needed the skill and magic of Colette's writing to convey this story to me.
Chéri is a young man who has been involved in a relationship with a middle aged courtesan, Léa, for about 6 years when his mother (another courtesan and acquaintance of Léa) arranges his marriage to another woman. It seems that Chéri and Léa do not realise their true feelings and need for one another until they have been pulled apart and the novel focuses on the outcomes of this for them as individuals and for the other people in their lives.
Chéri and Léa are both quite spoilt and self-obsessed characters in many ways - the type of characters I wouldn't normally be able to generate a lot of empathy for - but I did feel empathy and compassion for these characters as they expressed their feelings of loss and grief over the end of their relationship.
Colette's writing style is divine - a little more emotional and descriptive that I had imagined it would be for some reason but so beautifully emotive, it was probably her writing style that made empathy for such characters so easy.
I am keen to read more Colette now - any suggestions?
Posted by Karen at 3:08 AM

I just finished Cheri and loved it! My edition also includes The Last of Cheri, which I plan to start next week. I'll definitely be reading more by Colette, too.

Her writing is divine, isn't it? I need to read The Last of Cheri too and planning on fitting in some Colette during Paris in July.

I recommend Gigi and The Cat (usually found in one volume) and the Claudine novels.

I have The Vagabond to read for Paris in July and so I'll let you know how I find that. And for pure escapism the film Gigi...

I am unfamiliar with Cheri but in reading the posts, it appears the same author wrote Gigi? I love the movie (never thought to look for the book) But, if Colette wrote Gigi, then it is a must read for me. I am going to have to look these up. Hmmmm, maybe I should indugle and watch Gigi this month for my blog.

Hi JoAnn - I will be keen to hear what you think about The Last Of Cheri - I can't see the story getting any happier??!!

Hi Claire - divine is definitely the word to use for Colette! I went to look for more of her books today but couldn't find any - very disappointed. I will have to order them I think.

Hi Joan - I will try and find the film - thanks!

Hi Amy - I think you should!

I can't suggest any other Colette books, but I beginning to see that I need to read on. This one sounds very good.

I've never read any Colette but I just got a copy of this by nefarious means after watching the film and I'm interested to read it and see what Colette is like!

Claudine Married was an interesting read as well. I'm yet to explore the rest of the Claudine series by Colette.

Wow that was stгange. І ϳust wrote an гeally long comment but after
I clicked submit my comment ԁidn't appear. Grrrr... well I'm not writing аll that over again.
Regardless, just wаnted to say superb blog!

Awesome! Its really awesome article, I have got much clear idea on the topic
of from this paragraph.

Here is my web page ... how to lose weight quickly

Appreciating the commitment you put into your site and detailed information you present.
It's nice to come across a blog every once in a while that isn't the same
unwanted rehashed information. Wonderful read! I've saved your site and I'm including
your RSS feeds to my Google account.

Oh my goodness! Impressive article dude! Thank you so much, However I am encountering difficulties with your RSS.
I don't understand the reason why I am unable to join it. Is there anybody having identical RSS problems? Anybody who knows the solution will you kindly respond? Thanx!!

I like the valuable information you provide in your articles.

I'll bookmark your blog and check again here regularly. I'm quite sure I'll learn a lot of new stuff right here! Good luck for the next!

I'm pretty pleased to uncover this great site. I wanted to thank you for your time for this particularly wonderful read!! I definitely liked every part of it and i also have you book-marked to check out new things on your blog.

You're so interesting! I do not suppose I've read through a single
thing like that before. So nice to find another
person with some original thoughts on this subject.
Seriously.. thank you for starting this up.

This site is something that's needed on the web, someone with a little originality!