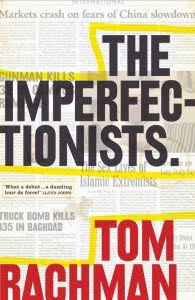 The Imperfectionists would have to be one of my favourite reads of 2010 so far - I don't think it is a perfect book by any stretch of the imagination (the title takes care of that!) but it was a perfect read for me.
The book centres on the life of an international newspaper located in Rome. The story of the newspaper is told in a series of chapters by different employees and readers of the paper with alternating shorter chapters covering the history and development of the paper which began as the idea of a wealthy American businessman wanting to keep hold of a connection with an old flame.
Each of the characters had a distinct voice and story to tell about their role in, and connection to, the paper. I thought each character could have easily had the whole book devoted to them and their point of view so while I loved how the book was structured I'm also left yearning to know more about the individual characters!
My father is a journalist and I have grown up in the world of newspaper production and the media and it is a world that holds a lot of interest for me so I especially loved the sections of the book that delved a little deeper into the production of the news. Having said this though, I don't think the author gets bogged down in detail - it is very much a character driven novel with the main character being the paper itself. I thought one of the main messages in the book was how print media is a dying breed - and how this impacts on the people working in this career but also on how we receive and pass on the news of the world.
A fantastic read - hope there is much more to come from this author.
Posted by Karen at 2:31 AM

Thanks for the review. Just put it on hold at the library - number 44.

This has been one of my favourite books of 2010 too. Some of the stories resonated more than others but it's a book I'm still thinking about, several months later.

This sounds different, and quite interesting. Will check it out (with luck, literally). Thank you!

I've heard some great things about this book. I'm hoping to read it sometime soon - I'm really pleased that you enjoyed it too.

This books sounds so good, it's definitely on my list now.

I REALLY want to read this one, so I'm really glad you loved it so much! It's always such a thrill to discover a book that you wouldn't change a single thing about. I love when I find those perfect reads... I hope I feel the same when I get to read it!

I have wanted to read this book since it came out, but I haven't managed to pick up a copy yet. I'm so glad you enjoyed it!

Hi Beachreader - gosh! That is a while to wait!!

Hi Claire - I know what you mean - it captured people/characters so well didn't it??

Hi Jackie - I think you would really like this one.

Hi Constance Reader - I really hope you enjoy it as much as I did!

Hi Steph - I hope you do too! My only problem now is finding a book to follow it!

Hi nomadreader - I hope you can track down a copy soon!

Oh, I do too! Some of the vignettes were funny, and some were also very moving. I enjoyed this very much.

This sounds like the perfrect read for a long week commuting on the train. Must see if I can fnd it sometime. I can see you being engaged in such a story too.. Thanks for this encouraging review.

Hi Audrey - glad to hear that you found this one enjoyable too!

Hi T - I think this one would be very good train reading.