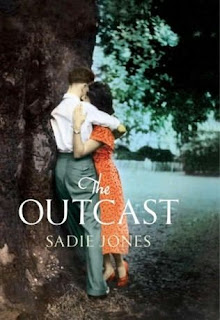 I had read Sadie Jones' second novel, Small Wars, earlier this year and while I had some problems with it I was still keen to read her debut novel, The Outcast.
I'm so glad I did because I found The Outcast to be a much better book and one that I connected with so much more.
The Outcast begins in a small village outside London at the end of the Second World War when 7 year old Lewis waits with his beloved mother, Elizabeth for the father he hardly knows to come home from the war. When Lewis's father, Gilbert, does arrive home things change in their household - while his parents clearly love each other they are from very different worlds and Lewis starts to see changes in his life because of this. The close bond he has developed with his mother starts to be torn away a little by the new intrusion of his father into their world.
An event occurs when Lewis is 10 years old that changes his world even more dramatically and the way in which people relate to him after this occurrence affects his development and relationships into adulthood.
This is an author that clearly like to take on the heavy topics! While there are certainly moments of joy and happiness in the book it is pain and tragedy that take the focus but unlike in Small Wars I think The Outcast deals with all of this pain in a much more realistic and connected way. I felt for Lewis through the telling of his story and the way in which it was told made me want to reach into the pages at times and shake people who were doing stupid things!! I wanted to be able to affect the action - to me this is always a sign that I am involved in a book and I care about what is happening to the characters.
The Outcast of the title could clearly be Lewis but there are many other characters within the story who would fit the title perfectly and this was another aspect of the book that interested me - who wasn't an outcast in some way?
I loved this story and the way in which it was told - looking forward to her next novel.
Posted by Karen at 3:13 AM

I also read Small Wars this year and didn't even finish the book. I was going to pass this book up, but will now give it a second look. Thanks for the review.

I wonder how it's possible for an author to have such brilliance in the debut, but then falls flat on the second? I feel for the author and wish I could have read it for them before it went to the publisher/editor, you know? Anyway, The Outcast sounds like a brilliant read, though, so I'll give this one a go! Thanks!

The cover is positively gorgeous!

Small Wars is a much better book than The Outcast. although perhaps not so accessible. I don't feel too sorry for her - it's a best-seller and she got long-listed for the Orange Prize again!

I haven't read any Sadie Jones, but I keep meaning to. I was always under the impression that Small Wars was the better of the two books, but your review seems to rubbish-ify that thought.

I'm glad you enjoyed the book, and hopefully, I'll join you in singing its praises soon.

I keep hearing about Sadie Jones/seeing her novels but for some unknown reason they just don't quite appeal. So, great to read a review of Outcasts - still don't think it's me but that may change...

I agree. Outcast was a much better book. It is interesting to read the comments from others who think it is the other way around. Perhaps that just proves they are very different books. Small Wars is quite distant, while Outcast allows you to connect with the characters.

New author for me. This one sounds fascinating.

Hi Beachreader - I would give this one a go and see what you think - I did find it a very different book to Small Wars in terms of characterisation.

Hi Coffee - It sounds like a lot of people have felt differently to me in regards to the two books so I'm not sure whether she has had one brilliant and one awful book so much as they seem to suit different readers??

Hi Softdrink - I know! I borrowed this copy from the library but I would love to have it sitting on my shelf I think...

Hi Tibbles - She has been quite succesful no matter what people have thought!

Hi anothercookiecrumbles - I think they are 2 very different books that would appeal to different readers - I think you should give them both a go and see what you think.

Hi Joan - there are always plenty of other books out there!!!

Hi Jackie - I agree, the issues of connection was really what won this one for me.

Hi Holly - I hope you check her out!

I have to say I'm in the Small Wars camp. I did love the Outcast, but I thought Small Wars was incredible - a more restrained book but really powerful almost because of that. I thought the writing was amazing. I agree that the different books probably just appeal to different people - makes me wonder which way she'll go with the next one!