The Girl Who Kicked The Hornets' Nest - Stieg Larsson 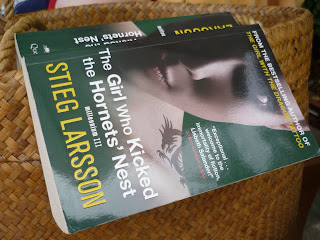 I read the final book in the Millennium trilogy, The Girl Who Kicked The Hornets' Nest while on my reading binge in Thailand - and I have to say that I think Thailand saved this book for me in some way - given that if I had been reading it at home I don't think I would have finished it.
I was really disappointed in this final book in the series - I guess I should have probably known this was coming from my less than enthusiastic response to the book before but that book ended with a bang for me and I was really keen to read the last one.
I felt the third book really just went over and over territory and material already covered extensively in the first two books. I didn't feel as though the last book progressed the characters in anyway for me - sure, Lisbeth became a little more personable and we got some "resolution" (however unrealistic and Hollywoodised that may have been) but by that stage I just didn't care. I kept reading away hoping that something new and exciting would happen as it did in the first two books - but it just never happened.
I have heard some people say that this was their favourite book of the series but for me the fun ended with The Girl With The Dragon Tattoo and after that all that was really needed was a really good editing.
I did get to read the book in this setting though so I guess it wasn't all bad! 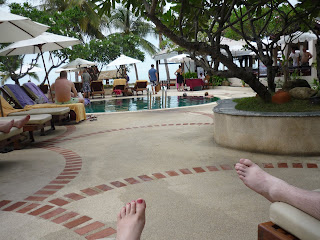 I'm sorry about the book, but the location it was read in loooks very very relaxing..... those feet definitely look relaxed!

Thanks for the review Karen, I haven't read any of these books. I had the first one out of the library but ended up returning it without reading. I've heard mixed reviews, mostly favourable. Still not sure if I'm interested.

The Girl with the Dragon Tattoo, albeit very graphic, is the best one. The other two I felt were fine, but none of them captured the same spirit and thriller-sense that The Girl with the Dragon Tattoo had. That was so good that it built the foundation for the next two, which didn't and couldn't, live up to the 1st one. I agree with a simple need for editing. A shame you had that on vacation but the view certainly seems relaxing!

I was pretty ambivalent about The Girl Who Kicked the Hornet's Nest too. Looks like you were reading it in an amazing place though!

Love the location you got to read it in - so that sort of makes up for a bad read, right? :) That is a bummer that the book just did not impress and was a disappointment. I have yet to begin the trilogy, although its sitting patiently on my nightstand. Hmmm. I've heard both great things and bad things about this trilogy - so it will definitely be interesting to see what camp I fall into. Thanks for the honest review!

I can believe that location saved the book! Talk about beautiful!

Sorry this book wasn't a winner for you. It's always a downer when something you're reading on vacation doesn't click!

Sorry about the book--but I'd be able to read nearly anything in a setting like that! Fabulous!

I've been uncertain as to whether to dive into these books or not--the titles have been calling to me for awhile now, but I've resisted. It is disappointing when a series fails to deliver. One of the things I like about series is that progression and I feel a bit cheated when the author doesn't deliver something new.

BTW, I have awarded you the Versatile Blogger Award. Visit my blog for details: http://janegs.blogspot.com/2010/07/versatile-blogger-award.html

I think most people feel the way about the book. It was still a page turner, but a little bit repetitive, and my complaints about the first 2 books were amplified in this one.

here is my review if you want to look
http://www.pageturnersbooks.org/2010/07/girl-who-kicked-hornets-nest-by-stieg.html

I stalled about 50 pages into this book. His lengthy descriptions of minor characters bored me to tears.

Hi Elise - These books do seem to get very mixed reviews. I did quite enjoy the first one but they really went downhill after that for me.

Hi Coffee - I wonder if the rapid success of the books and the death of the author led to them being released without a good editing??

Hi mynovelreviews - I think I could have tolerated almost any book in that setting!!

Hi Nadia - I am really looking forward to hearing your reaction on these ones when you get around to them.

Hi Steph - it is a bummer but funnily enough I still felt ok about reading it! I'm sure the location helped a lot!

Hi Jane - the lack of progression is definitely a failing in this series I felt. Thank you so much for my award!

Hi Becky - thanks for the link to your review.

Hi softdrink - I completely agree with the over describing!! So annoying!

This was quite the disappointment for me too. One of the things that bothered me the most was that Lisbeth didn't feel as central to the story. Oh and don't get me started on the Mikael's romance with the police detective!

This was my least favourite of the three. Still enjoyed reading it, but it just didn't have the same spark as the first two.

Girl Who Played With Fire was my favourite of the trilogy though...

Hi Iliana - I know, I know!! I really couldn't stand his character by the end of the series.

Hi anothercookiecrumbles - It was such a shame to leave the series on this note wasn't it??