The Opposite Of Falling - Jennie Rooney 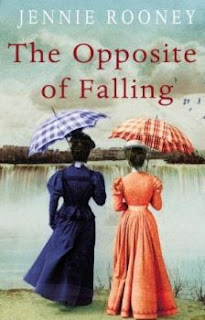 The Opposite Of Falling was another one of my holiday reads, I had bought it based on two things - firstly the gorgeous cover but mainly for the reason that I had read, and loved, the author's first book, Inside The Whale.
The Opposite Of Falling is a quite an ambitious novel in terms of subject and geographic material. Ursula Bridgewater is a woman of the upper classes living in Liverpool in the 1860's. She has experienced the calling off of an engagement and is seeking inspiration for what to do with the rest of her life. Ursula feels quite different to the other women of her class and era - she does not feel the need to get married and raise a family and she has a strong desire to "do something with her life";
All her life, Ursula Bridgewater had been building up to something. She felt it as a bubbling restlessness inside her, a straightness along her spine that occasionally came across as terseness, but which she did not really intend. She was of the opinion that one really ought to do something with one's life, especially if one had the necessary resources, but she had not yet fixed upon what this should be".
Ursula begins to explore her life's purpose through extensive travel, firstly through the UK and Europe and then over the seas to America. It is this trip to America which leads Ursula to employ a young female companion - Sally Walker, a young woman who has spent the majority of her life in a restrictive Catholic orphanage after the sudden death of her mother.
Sally and Ursula are two very different women - in both character and upbringing - but their combination is quite magical and I wish they had been brought together much earlier in the novel.
Once they arrive in America Ursula and Sally meet Toby O'Hara who runs hot air balloon rides over Niagara Falls during the day but is also working on a very different flying machine in his spare time as a way of maintaining a connection with his parents who are both deceased.
The Opposite Of Falling does feel like a very different book to Inside The Whale at first - there are more characters and settings to fit into the formula so it wasn't really until half way through the book that I felt I was in a Jennie Rooney novel in terms of the story (or stories) of the relationships. However, even though it took a little while to get into it it was well worth it once I did - the second half of the book is beautiful and the story of the connection between the main characters and the decisions they make in relation to their lives is one I will go back and read again.
Posted by Karen at 3:18 AM

Oooh, I'm keen to read this as I enjoyed the first one. Thanks for the review!

This sounds like a lovely book. I suspect that despite the different time in which it is set, it is something that a lot of women can relate to in one way or another

This sounds like a really interesting book Karen, I haven't read Inside The Whale, or in fact heard of Jennie Rooney. Thanks for the review :)

This one sounds terrific. I'm not familiar with Jennie Rooney either. Gorgeous cover.

I loved Inside The whale and I was struggling to resist ordering this while I caught up with other things. But I really must get an order in, it sounds wonderful!

I spotted this one on Amazon-UK and also loved the cover. It looks so good, I hope it doesn't take too long to get published in the US!

I have not read this author before - but your reviews of both these books have piqued my curiosity.

I think I would have picked up this book just on the cover alone. It's lovely.
Glad to hear it's a good story too of course.

Rachel
And the plot thickens...

Hi Verity - I hope you enjoy it!

Hi Becky - Definitely! I found myself empathising with Ursula a lot - I loved her character.

Hi Elise - I would start with Inside The Whale - a fantastic read.

Hi Holly - I hope you can track this one or her first book down.

Hi Fleur - I definitely think you should go and order this one!

Hi Danielle - I hope so too - for your sake!

Hi Molly - I can't wait for her next book now!

Hi Iliana - the cover of this one definitely would have caught my interest even if I hadn't have heard of the author I think.

Hi
New follower here.
Am reading this one at the moment.
looking forward to see more of your reviews.

I have been browsing online greater than 3 hours nowadays, yet I never found any attention-grabbing article like yours.
It is lovely worth enough for me. In my view,
if all web owners and bloggers made excellent content as you did, the web can be a
lot more useful than ever before.

Feel free to surf to my weblog ... Abercrombie Bruxelles

What i do not realize is actually how you're not really a lot more well-preferred than you might be now. You are so intelligent. You realize thus significantly relating to this matter, made me personally consider it from a lot of varied angles. Its like women and men are not interested unless it's something to
accomplish with Woman gaga! Your individual stuffs outstanding.
All the time handle it up!

Heya! I just wanted to ask if you ever have any trouble with hackers?

My last blog (wordpress) was hacked and I ended up losing many months
of hard work due to no back up. Do you have any methods to
stop hackers?

Here is my blog ... http://wealthwayonline.com/louisvuittonhandbags.html

I like the helpful info you supply in your articles. I'll bookmark your weblog and check once more here frequently. I'm reasonably certain
I'll be informed a lot of new stuff proper right here! Good luck for the next!

I am not sure where you are getting your info, but good topic.

I needs to spend some time learning more or understanding more.
Thanks for excellent information I was looking for this info
for my mission.

Here is my homepage; tedxyse.com

Hi there friends, how is the whole thing, and what you wish for to say concerning this post, in my view its actually
amazing in support of me.