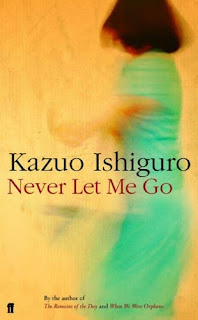 Kazuo Ishiguro has been a bit of a 'hit and miss' author for me - I absolutely loved The Remains of The Day but his latest book, Nocturnes really did nothing for me.
I know Jackie and Simon have both recently read and reviewed Never Let Me Go and I was interested in their reviews of this one but I am also really keen to see the movie when it comes out and I hate reading a book after I've seen the movie version which is the main reason I picked this book up now.
Never Let Me Go sets its premise but stating that it is about "a group of students growing up in a darkly skewed version of contemporary England". One of the students, Kathy H is relating her story and that of the students she grew up with at the age of 31 - coming to a turning point in her life as she prepares to move from the role of a carer, a role that she has held for the past 11 years. Terms such as "carer" take on a slightly different meaning in the world Ishiguro has created in this novel - there are other common place words and terms that become known in different ways throughout the book - this has the slightly unsettling effect of making you feel safe and comfortable with the world you are being led through - up until a point - then you realise that things are a little more concrete in the world in which Kathy H is telling us about.
I had a really hard time connecting with this book and the way in which it was being narrated. I realise this is probably the whole point given the setting, tone and purpose of the book but I couldn't relate to Kathy and the way in which she was telling her story. She was constantly going back to events in the past in a way which made me feel as though she wasn't present in the here and now - it all felt very forced. I did keep engaged enough to read this book quite quickly but I think part of that was me wanting to get to a stage where I felt something was happening now rather than in the past. That did eventually happen and the last section of the book was by far the best for me.
This book is definitely a "thinker" - I liked the fact that it has made me reflect on many social issues that are present and relevant for us in our society and communities today - I just didn't really enjoy or get much reading pleasure from the way the story was told which is a big part of reading for me.
Posted by Karen at 2:08 PM

I also read and reviewed this book recently. Admittedly, it was quite slow paced but it was worth it in the end. I really loved this book.

I am intrigued enough by this book--premise and writing--to give it a go, though I'm not convinced I will love it.

I remember being put off a bit by the premise of this book. I like your review, but doubt I'll read it. And I felt the same way about Nocturnes--so much anticipation, and such disappointment.
But we'll always have The Remains of the Day!

From looking at the title I was sure I'd read this book but now reading your review I realsie I haven't. I shall store it away in my head as I quite the other books I've read by him.

I have seen that a few people share your opinion - finding it difficult to connect with the characters. It is strange because I normally hate books that are distant like this one, but for some reason I loved it. I thought the way we were told things was very clever and I liked the clinical coldness of the writing. I just hope you enjoy the film a bit more :-)

You are not alone on this one, Karen! I didn't think this book was shocking or surprising (I guessed what was going on very early on), and I just could not connect with Kathy at all. She was so flat and monotone that I couldn't care about her, especially because she didn't seem all that invested in her future either.

However, I did love The Remains of the Day! That book certainly made me want to read more Ishiguro.

Wow, I just finished this book and LOVED it - I found it really difficult to put down for any length of time and I felt the narration created so much suspense...I too read it because I want to see the movie when it comes out. I've never read The Remains of the Day but I am sure to, now...

I will always have a soft spot for this book. Not because I totally loved it, but because it is the book which prompted what is probably the best online book discussion I ever was involved in.

In terms of reading it, I actually find it quite a taxing read, but definitely worthwhile.

Hi Mrs W - Glad to hear that you enjoyed it at the end!

Hi Jane - I think it is definitely one you should give a go and see what you think.

Hi ds - I absolutely agree! I wish I had re-read The Remains of The Day instead of reading this one actually...

Hi Joan - I find all of his books (well, the ones I have read so far anyway) so different - he definitely has an amazing talent.

Hi Jackie - I just watched the trailer for the movie and I think I will enjoy it - it looks so much better than the book for me!

Hi Nadia - I think the issues the book raised made me think - not the book itself though - I didn't like it all!!

Hi Steph - I am completely with you on Kathy - I know she was a product of her restricted environment in so many ways but that didn't help me in empathising with her at all!!

Hi Courtney - it really seems as though this is a book that completely divides people - it seems you either love it or loathe it!!

Hi Marg - I do actually wish I had read this book as part of a book group - I think I would have gotten so much more out of it.

I read the book first, thought it was ok. Then went to see the movie, liked it a lot. Then went home and reread the book, and loved it this time around. I think the movie helps me visualize the poignancy of the story. I've written a review on the book and the movie. Carey Mulligan has done it again. Just like An Education, her performance is impressive.

I have to admit, I have tried reading this book about three times before I actual finished. It was mostly due to my age and the fact that I didn't understand it. But recently, I read it for a school assignment and I actually really liked it from beginning to end. Even though it was dark and gloomy, and some parts were confusing, it was overall really good. I found myself unable to stop thinking about it, unable to stop trying to figure it all out. I think if you really sat down to figure out not what happened but what Kathy is actually saying, and put yourself in her shoes during the very last scene, it changes the way you see the rest of the book.