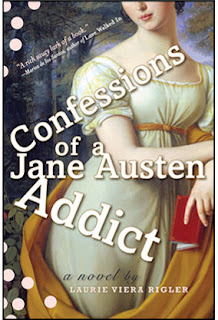 Half way through reading Confessions of a Jane Austen Addict I came to the realisation that I had read it before - and I hadn't really liked it all that much the first time around! The reasons for me not enjoying it the first time all came flooding back - although I did keep reading until the end so there must have been something keeping me hanging in there.
First of all, I love everything even slightly related to Jane Austen and the city of Bath in particular. Even though I know all of Jane Austen's letters etc... clearly state she couldn't stand the place I still feel it is my spiritual home! So, when the blurb for Confessions of a Jane Austen Addict talks about trips to Bath and balls in Assembly Rooms, I'm in.
The book is basically a time travel/body swap tale - a modern day LA woman, Courtney Stone (the Jane Austen addict of the title) wakes to find herself in the body of a nineteenth-century English gentlewoman, Jane Mansfield after spending a night drowning her sorrows in a bottle of vodka and Pride and Prejudice after breaking up with her rat of a fiancee.
The premise to the story (I think) is that Courtney/Jane needs to "stop thinking" and give in to her destiny (whatever that may be) in order to find herself back in her own body and century. Now, I can suspend all belief and give in to the time travel thing - that isn't my problem with this book. The problem I have is that Courtney/Jane is annoying, whining and boring! I simply don't care if she does get stuck in 19th century England for the rest of her miserable life! Her constant reflections and self-talk got in the way of the story for me.
I did stick it out to the (predictable) conclusion though - not really sure why! I so wanted to enjoy this book and be taken away to the world of Jane Austen - unfortunately I got stuck in the mental meanderings of Courtney/Jane and I couldn't seem to find my way out.
Posted by Karen at 6:07 PM

Aww, sorry to hear you didn't like it! I bought both books by this author a while ago because they sounded interesting - we'll see what I make out of them, hehe. :)