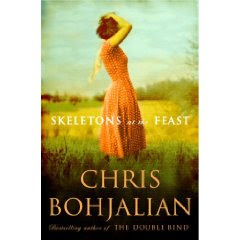 My holiday is less than a week away now - only 4 official working days to go (but who's counting?!) so I am busy gathering my holiday reading. I was helped along today by my local library who sent me a message to say that 2 books I have recently put a hold on were ready for me to collect. The books seem worlds apart in terms of genre but I'm hoping I will enjoy them both.
Firstly is the new book by Midwives author Chris Bohjalian, Skeletons at the Feast. I am a big fan of this author and was excited to see that he had a new book out.
A description of the book from the publisher:
In January 1945, in the waning months of World War II, a small group of people begin the longest journey of their lives: an attempt to cross the remnants of the Third Reich, from Warsaw to the Rhine if necessary, to reach the British and American lines.Among the group is eighteen-year-old Anna Emmerich, the daughter of Prussian aristocrats. There is her lover, Callum Finella, a twenty-year-old Scottish prisoner of war who was brought from the stalag to her family’s farm as forced labor. And there is a twenty-six-year-old Wehrmacht corporal, who the pair know as Manfred–who is, in reality, Uri Singer, a Jew from Germany who managed to escape a train bound for Auschwitz.As they work their way west, they encounter a countryside ravaged by war. Their flight will test both Anna’s and Callum’s love, as well as their friendship with Manfred–assuming any of them even survive. Perhaps not since The English Patient has a novel so deftly captured both the power and poignancy of romance and the terror and tragedy of war. Skillfully portraying the flesh and blood of history, Chris Bohjalian has crafted a rich tapestry that puts a face on one of the twentieth century’s greatest tragedies–while creating, perhaps, a masterpiece that will haunt readers for generations.
My other library pick up was the new book by Candace Bushnell, One Fifth Avenue. I have not read any of Bushnell's books before but I am a huge Sex and The City fan so I decided I would give this one a try.
If anyone has any other holiday reading suggestions I would love to hear them.
Posted by Karen at 3:12 AM

I don't have any great suggestions, but Skeletons at the Feast sounds like a great book! I'm looking forward to your review!

Thanks Laura - I probably have way too many books for a one week holiday but I can't help gathering more and more!

I borrowed this one on audiobook. If I ever finish Great Expectations, my plan is to listen to this book next!